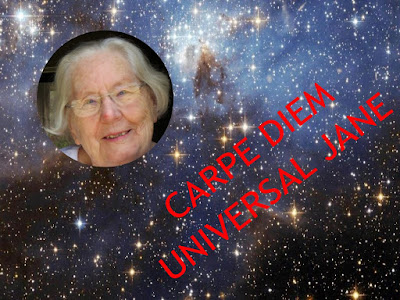 First my apologies for the delay of this "weekend-meditation", there were things that needed my attention. This "weekend-meditation" is a new episode of our special feature in honor of Jane Reichhold, "Universal Jane". A few years ago Jane gave me permission to use all she has published online and as books. Of course I was honored that she gave me that permission and I am still grateful for that. Of course all I use written by her I will credit ... as I always (try) to do.

As you all know Basho, my master, was one of Jane's favorite haiku poets and she gathered all his haiku in her beautiful book "The Complete Haiku: Matsuo Basho". Here at CDHK I have often used this beautiful book and today I love to honor her again with an article she wrote about Basho's renown haiku "frog pond".

A Discussion about the "Old pond" Haiku by Basho, Jane Reichhold

There was the thought that maybe it would be helpful if we could discuss a well-known example of a haiku, so that memories could be refreshed on some of the finer aspects of the form without having to send readers off to other sites. I hope this essay gives you pleasure and light.

an old pond
a frog jumps into
the sound of water
(tr. Jane Reichhold)

This haiku, by Basho, was said to have occurred when Basho’s Zen master, Boncho, was visiting him. According to legend, the master had asked Basho a koan-like question (meaning a riddle with no answer) and Basho, instead of searching for an answer, replied with “a frog jumps into, the sound of water.” This could have happened as Basho was living, at that time, in a cottage-hut his students had built for him on the marshy ground where another river joined the Sumida, at the edge of what is now Tokyo. So he was living in a vicinity with lots of frogs.

However, we have evidence that about six months before this incident, Basho had written a poem using the phrase “the sound of water.” This shows that he was already working with the idea.
Also, one of his students later, in 1692, wrote that when Basho first wanted to make these lines into a haiku (called hokku at that time) he was searching for a first line. Kikaku suggested “yellow roses” but Basho rejected this. It was only after some time he settled on the idea of “an old pond.” So much for the idea that the best haiku come from a moment of inspiration or a haiku moment. They come from some inspiration and a lot of skill in writing.

Maybe it will be helpful for those of you wanting to use 17 syllables to have a word-for-word translation to see exactly how much information is in the original poem:

furu = old, ancient
ike = pond, pool
ya = one of those words indicating punctuation with sort of the feeling you would get from saying “ah” and letting the air leave your chest.
kawazu = an archaic word for frog. At that time, the current word was “kaeru.” The words both have three sound units (ka-wa-zu and ka-e-ru) so that cannot be the reason Basho picked the word he did. Some have suggested that since the beginning of written poetry in Japan frogs had been noted for their songs or their voices. This was the first time someone wrote about another sound aspect of the frog without mentioning the croak – part of the glory of this haiku.
tobi = jump, leap, vault, flip or fly
komu = in (or into)
mizu=water
no= indicates the possessive case and is translated as “of” or could be “water’s”
oto = sound

If you are counting syllables:

You can see the haiku has the necessary fragment, (an old pond), and then the phrase, (a frog jumps into the sound of water).
I think you can see why Basho picked “an old pond” for his beginning. It grounds the reader with a familiar image, a trusted image of something nice to think about. He lulls the reader into thinking this is going to be an easy haiku. He even uses the old word for a frog, which now matches the old pond. With the words “jumps into” the reader’s mind is jerked around, with the thought that something is happening (the job of verbs!). At the end of the line one wonders what is coming next and then Basho springs his brand new idea – “the sound of water” which is rather common but is so uncommon in this connection!

The reader must back up to recapture the frog and its jumping to understand that the frog’s sound is not one of croaking but its whole sound is only water. One can also think that the frog is not jumping into actual water, but into the sound he creates as he hits the water. There is a paradox here. Is the frog jumping into water or sound?  Can it jump into one without the other? These reverberations of thinking are what make a haiku so interesting, and later – so famous.

Basho begins with an image that sets the scene for his poem. This is a good technique. Turn the first and last lines around and see how wisely he saved his “punch line” for the end and how necessary this is.

Since the Japanese use the same word for singular and plural (as we do with sheep, fish and deer), we assume, in English, that there is only one frog. However Basho drew a picture, called “haiga,” of the scene and there is only one frog in it which seals the case. Always check your own haiku to see if you can use the singular instead of the plural.

Frogs then and now are often thought of as “lowly creatures” but Basho’s spiritual and intellectual development, to conceive of the idea of how water and sound are alike, allowed him to use this image to carry across his idea. It would have been more “elegant” to write of the bush warbler, but haiku allowed him to speak simply of common things to carry elegant ideas.

Notice too how the first and third lines (I call them lines because of the way we typeset the three parts of Basho’s poem) relate. This is using the associative technique. The old pond and the sound of water are one thing, very alike and when you think of them together you come to a new understanding of each of the images.

Over the century since this was first translated into English, the versions have varied widely.
From Peter Beilenson, in the Peter Pauper series of haiku books of 1955-56:

Since these books were so widely read and admired, you can understand how and why so many haiku were written in this style and what a shock it is for some, yet today, to realize the brevity and plainness of a haiku.

Kenneth Yasuda, who did so many translations and a book on how to write haiku, wrote:

Ancient pond unstirred
Into which a frog has plunged,
A splash was heard.

It seems he was more interested in using 17 English syllables than correctly translating the poem. Again, he led so haiku many enthusiasts in a wrong direction.

Oh thou unrippled pool of quietness
Upon whose shimmering surface, like tears
Of olden days, a small batrachian leaps,
The while aquatic sounds assail our ears.

The old pond
A frog jumped in,
Kerplunk!

completely missing the magic in “the sound of water” and taking the poem for its surface worth. It was also Ginsberg and Kerouac who misused the word haiku by making an English plural out of it to be “haikus” which is seriously frowned upon by scholars and haiku writers.

In the interest of brevity, we end with James Kirkup’s:


(These examples of translation were borrowed from Hiroaki Sato’s book, One Hundred Frogs.) This article was published earlier on Jane's own website: Aha Poetry!


A wonderful article I think. For sure worth to read and re-read and to meditate and contemplate, as is the goal of our "weekend meditation".

Here is haiku which I wrote several years ago inspired on this beauty by Basho:

croaking frogs
scent of the old pond
in the evening

This "weekend-meditation" is open for your submissions Sunday April 9th at 7.00 PM (CET) and will remain open until April 14th at noon (CET). I will publish our next episode, unmelted snow, later on. Have a great weekend.