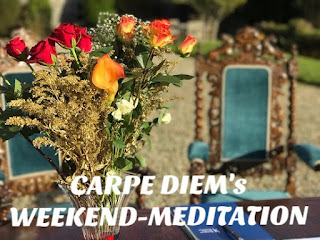 Chiyo-ni (Kaga no Chiyo) was a Japanese poet of the Edo period, widely regarded as one of the greatest poets of haiku. Being one of the few women haiku poets in pre-modern Japanese literature, Chiyo-ni has been seen an influential figure. Before her time, haiku by women were often dismissed and ignored. She began writing Haiku at seven and by age seventeen she had become very popular all over Japan and she continued writing throughout her life. Influenced by the renowned poet Matsuo Bashō but emerging and as independent figure with a unique voice in her own right, Chiyo-ni dedication toward her career not only paved a way for her career but it also opened a path for other women to follow. Chiyo-ni is known as a "forerunner, who played the role of encouraging international cultural exchange".


She is perhaps best known for this haiku:


morning glory!
the well bucket-entangled,
I ask for water
© Chiyo-Ni
Today, the morning glory is a favorite flower for the people of her home town, because she left a number of poems on that flower.


The "Morning Glory" haiku is one of her renown haiku. I think you all have read this one very often. This is the haiku you have to "revise" this weekend. It will not be an easy task, but I think you all will succeed in this task.
Of course I have given it a try myself, and it was for sure not easy, but I think this "revision" is really nice (how immodest).
in the light of dawn
Morning Glory embraces the well
my neighbor gives me water
© Chèvrefeuille
What do you think of this "revision"? Please share your thoughts through the comment-field.
This weekend-meditation is open for your submissions next Sunday February 18th at 7:00 PM (CET) and will remain open until February 25th at noon (CET). Have a great weekend and enjoy this challenge to revise this renown haiku by Chiyo-Ni.
By Chèvrefeuille - February 17, 2018