What a joy to read all of your wonderful haiku which you have shared with Carpe Diem on our first 'real' episode of our Tarot journey, The Fool. As JRB said in his post [...] "Socrates once said when you know nothing you're wise" [...] and that's where it's all about ... knowing nothing will bring you wisdom. Our next step in our Tarot-journey is The Magician (I). Let us look closer to the R.W.-card of The Magician. 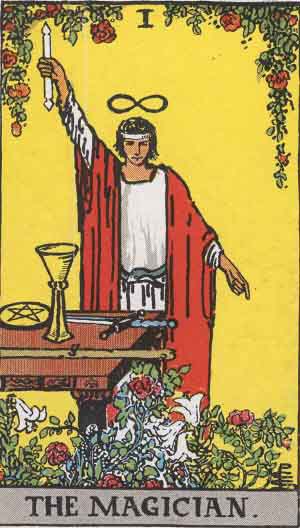 The curves of the magician's hat brim in the Marseilles image are similar to the esoteric deck's mathematical sign of infinity. Similarly, other symbols were added. The essentials are that the magician has set up a temporary table outdoors, to display items that represent the suits of the Minor Arcana: Cups, Coins, Swords (as knives). The fourth, the baton (Clubs) he holds in his hand. The baton later stands for a literal magician's "wand".
This card signifies the divine motive in man. It is also the unity of the individual being on all planes, and in a very high sense it is thought. With further reference to the "sign of life", i.e. the infinity symbol and its connection with the number 8, it may be remembered that Christian Gnosticism speaks of rebirth in Christ as a change "unto the Ogdoad." The mystic number is termed Jerusalem above, the Land flowing with Milk and Honey, the Holy Spirit and the Land of the Lord. According to Martinism, 8 is the number of Christ. Martinism is a form of mystical and esoteric Christianity concerned with the fall of the first man, his state of material privation from his divine source, and the process of his return, called 'Reintegration' or illumination.

He, The Magician, embodies the lesson of “as above, so below," the lesson that mastery in one realm may bring mastery in another. He also warns of the danger of applying lessons from one realm to another.
The Magician transcends duality. He has learned the fundamental elements of the universe, represented by emblems of the four suits of the tarot already broken apart and lying on the table before him. Similarly, in the Book of Thoth deck, he is crowned by snakes, another symbol of both infinity and dualism, as snakes have learned from Gilgamesh how to shed their skins and be reborn, thus achieving a type of immortality; the blind prophet Tiresias split apart coupling snakes and as a result became a woman, transcending the dualism of gender. The lesson "as above, so below" can be seen in the both hands of The Magician. His right hand points to Heaven and his left hand points to Earth.

In this duality we even can see the Cathars, which had their 'headquarters' in Montsegur. In the Middle Ages the Montsegur region was ruled by the Counts of Toulouse, the Viscounts of Carcassonne and finally the Counts of Foix. In 1243–44, the Cathars (a religious sect considered heretical by the Catholic Church) were besieged at Montségur by 10,000 troops at the end of the Albigensian Crusade. In March 1244, the Cathars finally surrendered and approximately 220 were burned en masse in a bonfire at the foot of the "pog" (mountain) when they refused to renounce their faith. Some 25 actually took the ultimate Cathar vow of consolamentum perfecti in the two weeks before the final surrender.
The last of the Cathars was burnt by the inquisition of the Roman Catholic Church at Montesegur, Languedoc, France in 1244, but they left this prophecy: [...] "That the Church of Love (within each person’s heart-soul centre or their ‘holy of holies’) would be proclaimed in 1986" [...]
The Cathars didn't belief in the Holy Trinity, but saw only the duality of God the Father and God the Son. And that duality was also, in their opinion, "Materialistic and Non-Materialistic".

as above, so below
the Magician bridges the gap
between God and man

OK ... let us look closer to The Magicians meaning and the Kabbalah. The Magician stands for 'eternity' as we can see at the sign above his head. 'Eternity' is, in my opinion, timeless and so The Magician is part of, as they call it in the Kabbalah, the 'Upper Triade' in which we see three sefirah, Kether (the crown), Chochma (the wisdom) and Binah (understanding), in this 'Upper Triade' the idea of  'so above, so below', is strongly present, because it stands for the interference of God the Father with Earth through sending his Son Jesus Christ. So in this idea 'The Magician' knows all, but on the other hand, he knows nothing as we follow what Socrates said. The Magician will always be a student, always on a quest for more wisdom.
Maybe in that way The Magician is like the Pharisees.


Rose of Sharon
at the feet of the Magician -
how wise shall he be?


Well ... this was (again) not an easy post to prepare, but I think it has become a nice post and I hope it will inspire you to write haiku and share them with Carpe Diem, the place to be if you like writing and sharing haiku.