Yesterday we had drawn The Empress (III) and today our next draw is The Emperor (IV). Let us look closer to this card. The card as depicted hereafter is from the R.W.-Tarot-deck. 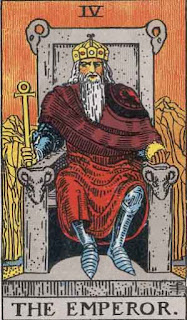 The Emperor sits on his throne, holding a scepter, accompanied by the heraldic Eagle of the Holy Roman Empire. This is usually on his shield though the heraldic eagle is sometimes a free-standing statue or live bird. He symbolizes the top of the secular hierarchy, the ultimate male ego. The Emperor is the absolute ruler of the world and as such synonymous with God or Yahweh. He sits in the middle of a field and not in a palace or something. He is direct visible to the world. He has not weapons only his scepter, symbol of the world his emperium.
Where the Empress is the Feminine principle, the Emperor is the Masculine. Most individuals will relate to this card in the same way they relate to their own father.
The Emperor is Key Four of the Major Arcana. Fours are stable numbers; four walls, four seasons, four corners, four winddirections. The strength of The Emperor is the stability he brings. The weakness is the risk of stagnation.

the Emperor watches
from his heavenly throne
to all he created


The Emperor is connected to Key 13, Death, through its cross sum (the sum of the digits). Emperors maintain their power through death and through their relationship with the other 13 of the tarot; The Queens (who legitimate their rule and bear their heirs). He is also strongly associated with Life; his scepter is an ankh, the symbol of life.


But he is in the mountains, separated from the pulse of life. The sign of the Emperor is associated with the sun sign of Aries. Aries is the first sign of the zodiac and is the leader. The Emperor, like Aries, is fiery, powerful, authoritative and very egotistical.

Every religion or philosophy has it's own 'creation-story', that's also in the Christian Bible. It commences "In the beginning God created the heaven and the earth". So there has to be a beginning of some sort at some point in time. Prior to this commencement there was nothing - except the God-force, the Universal mind. That must have been the case, because something never comes out of nothing. So there was only God, the only 'stuff'. God had to have thought-energy and commuted it into matter-energy. That means we all are part of God (and His Creation) that makes us co-creators of our experience in our world. It's all 'reason'.

In that case, The Emperor (as synonymous with God, Yahweh) only has Power through reason and that makes that we, as co-creators (and emperors) have Power to. Together, as one symbiotic creature, we are God and the Creator of our surroundings. Part of us is Empress (III) and part of us is Emperor (IV), in us are the productive (female force) and the rationality (male force) bound together. That makes that we have emotions, intuitive feelings and thoughts and so we can decide ourselves what we don't want.


man and woman
bound together through The Emperor -
creating our world


As we look at this 'co-creating' through the energy of the Emperor, we also are Christ the Son of God, because Christ said: 'My Father and I are One', so that makes us divine. Divinity is granted through unconditional love for all and everything. We are Co-Creators as being part of God the Father and God the Son.

The Emperor, how is he connected to the Kabbalah? Let's look at that, because that was from the beginning of this Tarot-month my goal 'to show the divinity, the positivie energy, of the Tarot through the Kabbalah'.


divine Tarot
superimposed over The Tree of Life
mysteries unveiled


The Emperor on his throne in the middle of the fields where does he stand on the Tree of Life? You would think in Kether, the first sephira, the crown, the divine, but that's not true. The Emperor is the ruler of Jezirah. Jezirah contains the following sephiroth: Chèsed, Geburah, Tifèreth, Nèzach, Hôd and Jesôd. Jezirah is the realm of formation and astral consciousness and rules Air. In that way The Emperor could even be associated with the Holy Spirit and that makes him a Trinity and than the circle is completed and than we can place The Emperor on his throne in Kether, the first sephira, in which God is the ruler and creator of it all. If that's the way? Than this knowledge confirms that we are ... co-creators and as co-creators we can create our surroundings ... and that can be positive or negative ... so the choice is up to us ... all part of God made of 'God-stuff'.


the crown
created out of nothing -
light of the world

light of the world
crucified for our life's sake
finally free


That last line 'consciousness regained', for closure of this episode, means: The Emperor, God, we all, represents the self-consciousnes mind and, thence "reason", as that is what self-consciousness performs. That being stated ... I adress this divine Tarot as our unity with the Universal Mind, the divinity, God. With this I close the circle which, in this episode started, with the first line of the Christian Bible: "In the beginning God created the heaven and the earth".


Well ... this episode wasn't easy to prepare, because of the research it needed to connect it with divinity, but I think I have succeeded, but that's up to you to decide. I hope you enjoyed the read and that you all are inspired to write haiku with this prompt, The Emperor.
This prompt will stay on 'til May 8th 11.59 AM (CET) and I will post our new episode, a new card draw in our Tarot-journey, The Hierophant (V), later on today around 10.00 PM (CET).