Until today the Tarot-month does well and I think that we can already say that the Tarot has a positive message and meaning. Maybe this positive idea on the divine Tarot is where Tarot once was made for. Next of course to the Tarot as a game of cards.

The card which I have drawn today is, in my opinion, one of the best cards of Tarot. It's The Lovers (VI). On the surface, the lovers are associated with relationships, desire, lust, and sex. It's near the top of the Kabbalastic glyph "The Tree of Life", far removed from physical reality, and even further, even beyond the realm of personality. The (The Lovers) are a diagram of the nature and experience of the enlightened mind.

Let us look closer to The Lovers (VI) as it is depicted in the R.W.-Tarot-deck. What do we see? 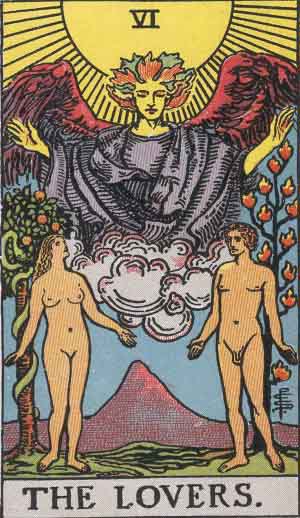 We see four main characters: The Angel, the Woman (Eve), the Man (Adam) and the snake. The Tree of Knowledge of Good and Evil from the first book of the Bible, Genesis, is also on the card (left behind Eve) and a tree in flames (behind Adam), this is (in some explanations) the glyph of the Kabbalah, The Tree of Life.
Above we see a radiant sun and below is a single mountain peek. How to explain all these details, these important symbols? They all have multiple layers which are all significant.


depicting Genesis
Adam and Eve together
in Paradise


The card has first the whole story in it of the Fall (Genesis 3), second: it shows the ideas 'so above, so below', this idea I mentioned already in earlier episodes. Thus making that the cards of the Major Arcana (as we are using this Tarot-month) are in some way bound together. Third: The both humans, woman and man, stand for the way God has meant it to be. (By the way this is the idea of a lot of people, but I am a guy who lives out of unconditional love and so I think that God also made the love between man and man and woman and woman).


As we saw in the episodes of The Empress and The Emperor, woman stands for life giving and softness, curved lines and man stands for taking life and toughness, hardness, straight lines. In that way woman and man are connected to eachother through feeling and reasoning and that makes them one.


bound together
through curves and straight lines
woman and man


The Lovers are Adam and Eve, both were made of 'God-stuff' and so they are (just as everyone and everything) part of Him. Adam and Eve are the ancestors of all humankind.
Why are they naked? Nakedness is pure, it's the way how we come to Earth, pure energy and in all good. Can you imagine how the world would have looked as Eve had not taken the Apple?

We further see the Angel, which Angel it is? I don't know, but I think it is one of the Archangels, as e.g. Gabriel or Michael. After The Fall God placed cherubim to guard the Garden of Eden in the East and a flaming sword flashing back and forth to guard the way of the Tree of Life (Genesis 3:24). In this we see the mysterious and mystical Kabbalah, the Secret Knowledge for which the Tree of Life stands.
The Mountain (looking very similar like Mount Fuyi) stands as a symbol for The Law as given to Moses on Mount Sinai when the Israelites were in exile through the desert (Exodus 20:1-17).
So The Lovers (VI) depict in a certain way the Torah (The Five First Books of the Bible and the base on which the Kabbalah is build).

The Angel also stands for the Realm of Spirit, or the infinite aspect of ourselves. That part connects us, humans, with the essence of all things, sharing in an universal experience. That's also the reason why the humans are depicted naked. In their nakedness they are existing in their highest state, closest to the higher powers, just before learning about the existence of evil. Close before The Fall.


universal experience
walking on the path of wisdom
finding the truth


As I was preparing this episode full of love. I thought at the Song of Songs or The Song of Solomon. For sure a lovesong which was composed with the deeper meaning of divine unconditional love for all and everything.

Let us go on a step further with The Lovers (VI). Where are they positioned on the Kabbalastic glyph "The Tree of Life"? And what is their meaning in the Kabbalah?


This card shows very clearly our state at this time. It is here that we begin to feel the power inherent in our own feelings; the strange quality that lies in intuition and the glamour attached to sex. It is a very different kettle of fish from the orderly regulation of the neat “Thou shalt” and “Thou shalt not” of the intellect. The guidelines of stages four and five seem of little value here, yet we shall find that we need to refer to them again and again.
We may discover that we are reluctant to undertake this part of the journey. Finding ourselves half way across this path can become alarming - we can begin to swing between intellect and feelings like the unregulated pendulum of a crazy clock. Here we first begin to make the decision whether to go on or turn back, and it may seem that it is as difficult to do the one as it is to do the other. Make a choice we will, however, for the immediate goal of our journey now begins to be visible in the distance as we become dimly aware of the possibilities before us. This is illustrated by the symbolism on the card. This stage is the Path which joins the Sephiroth Hod and Netzach, and if we look at this path we see that the Self of Tiphareth, the very centre of the Tree, stands immediately above us, like the light behind the figure in the illustration. If we become aware of this to any appreciable degree, we shall go on, for we become aware that the voice which calls us onward is our own, calling from deeper levels of being.

So The Lovers are connected with Tiphareth, the sixt sephira seated in the heart of the Tree of Life. It is there that we find Christ Consciousnes, as we have seen in earlier episodes. This Sephira is, for us, the most significant on the Tree of Life, and one of the most difficult to describe. In astrology it is represented by the Sun, the centre of our own solar system, and Tiphareth may be regarded as the centre which holds the other Sephiroth together in a similar manner. In Tiphareth all conflict may be reconciled, all seeming contradictions resolved. Tiphareth is the principle of manifest being. To avoid confusion, we must remember that it is manifest being which is being referred to; absolute being is a quality of Kether and the unmanifest which precedes it. Without Tiphareth, all the principles of form and energy which have gone before can come to nothing. The knowledge of force and the understanding of form cannot of themselves cause anything to become manifest in creation. In order for there to be knowledge there has to be one who may know; for understanding, one who may understand. 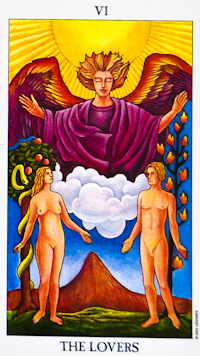 There has to be finite being. Tiphareth represents the principle of manifest being itself, at all levels, be it the individual human being, about whom we understand so little, the being at the centre of the universe, or at the heart of the pebbles on a beach. Tiphareth is the heart of all true religion, for it is the lower representative of Eternal Being, the life of which flows like a cool stream through all that lives. If Kether is God unmanifest, Tiphareth is God manifest. In us it is the individual soul, also called the Self. Tiphareth is the soul of all things. Kether is the Spirit of all things, and Yesod, the Foundation, together with Malkuth, the tenth and final Sephira, representing the outward appearance, is the body of all things.

As we seated The Lovers in Tiphareth than we can place them also in the "first Triade", there were Kether, Binah and Chochma are the rulers. There we see the holy trinity which God has with Eve and Adam and in that way they are similar to the Holy Trinity of The Father, The Son and The Holy Ghost. Thus Eve and Adam, The Lovers, our ancestors are in the same realm of God, our Creator and part of us as we are part of Him.


unless The Fall
Eve and Adam are God's Children
sharing eternity


Well ... I hope that this episode brings you all inspiration and I hope to see wonderful haiku inspired by The Lovers (VI). It was a joy and a struggle to prepare this episode for you all my dear Haijin, visitors and travelers.