What a journey don't you think too? I have read wonderful 'ku' on The Magician, very different to eachother, and that makes me happy. Of course I know that not every contributor to Carpe Diem will participate this month, but well ... we live in a free world ... 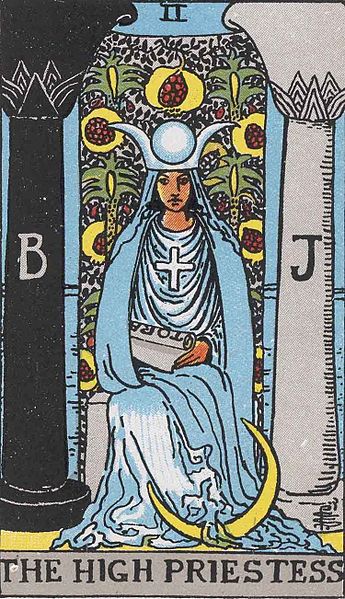 In the R.W.- Tarot deck, upon which many modern decks are based, The High Priestess is identified with the Shekhinah, the female indwelling presence of the divine. She wears plain blue robes and sits with her hands in her lap. She has a lunar crescent at her feet, "a horned diadem on her head, with a globe in the middle place" similar to the crown of the ancient Egyptian goddess Hathor, but with the horns having a shape more like half-crescents, and a large cross on her breast. The scroll in her hands, partly covered by her mantle, bears the word TORA or the Thorah, the first five books of The Holy Bible. She is seated between the white and black pillars—'J' and 'B' for Jachin and Boaz—of the mystic Temple of Solomon. The veil of the Temple is behind her: it is embroidered with palm leaves and pomegranates. The motif that hangs behind the High Priestess’s throne, veiling whatever mysteries she guards, is suggested in the pattern of The Empress’ gown. The two are sisters, one bringing life into the world, the other inviting the living to the esoteric mysteries. Further behind all of that is what seems to be a body of water, most probably the sea. The water flows through most of the cards of the R.W.-Tarot and binds all the Tarot cards together as one. Water is also life giving and so are women.

flowing with the stream
the Highpriestess on her throne -
divine mother

through the Holy Spirit
mankind opened their eyes
secrets reveiled

With the pillars, Jachin and Boaz, the connection is laid with the Holy Scripture and the wisdom of Solomon. So The Highpriestess is an equivalent of King Solomon, but also equivalent to The Bride of Christ, the Maternal Mother Maria.

Back to my reference of Shekinah, Shekinah is one of the names given to Malkuth (or the Throne), the 10th Sephira on the Kabbalistic 'Tree of Life'. That's the reason that The Highpriestess is depicted sitting on a throne. Her virtue is discernment and that's similar to the action of the Holy Spirit.
The Shekinah in the New Testament is commonly equated to the presence or indwelling of the Spirit of the Lord (generally referred to as the Holy Spirit, or Spirit of Christ) in the believer, drawing parallels to the presence of God in Solomon's Temple. In contradistinction with the Old Testament where the Holy of Holies signified the presence of God, from the New Testament onwards, it is the Holy Spirit that reminds us of God's abiding presence. Furthermore, in the same manner that the Shekhinah is linked to prophecy in Judaism, so it is in Christianity:
"For no prophecy ever came by the will of man: but men spoke from God, being moved by the Holy Spirit". (2 Peter 1: 21)

Where references are made to the Shekinah as manifestations of the glory of the Lord associated with his presence, Christians find numerous occurrences in the New Testament in both literal (as in Luke 2:9 which refers to the "glory of the Lord" shining on the shepherds at Jesus' birth) as well as spiritual forms (as in John 17:22, where Jesus speaks to God of giving the "glory" that God gave to him to the people).

on her throne
she, Shekinah, the Spirit of God,
looks at the world

As I was preparing this episode I ran into a nice reference to The Highpriestess in the Qur'an which I love to share here with you, my dear haijin, visitors and travelers. According to one of the Interpreters of the Qur'an Shekinah is: a spirit from God that speaks, and, in the case of the Israelites, where people disagreed on some issue, this spirit came to clarify the situation, and used to be a cause of victory for them in wars. "Shekinah is a sweet breeze/wind, whose face is like the face of a human".
In the way this Interpreter of the Qur'an speaks about Shekinah, she could be like the Oracle of Delphi, or could been equivalent to the wise King Solomon.

So ... does the Tarot have it's roots in all the different religions we have? It looks like that, but ... well we will see it later on in this month.

rooted in the world
All Gods are One God
divine Tarot

For closure ... in the Old Testament you can read the story of the Exodus of the Israelites through the desert. They had a 'mobile' Tabernacle which they prepared every day. The Shekinah, The Highpriestess (II), was always traveling with them. She was the pillar of clouds in front of the Israelites and she was ever present at the Holy of Holiest of the Tabernacle. Being the Spirit of God, she leads the Israelites to the Promised Land.

Well ... I hope you have enjoyed the read and I hope you are inspired to write your haiku on this Tarot-card. And ... as we go on on our journey ... the divine Tarot will unfold.
This prompt will stay on 'till May 5th 11.59 AM (CET) and I will post our first Carpe Diem Special by Kyoshi Takahama, later on today around 10.00 PM (CET). (PS. I will reproduce the haiku for that first Special hereafter.)

a dead chrysanthemum
and yet - isn't there still something
remaining in it?