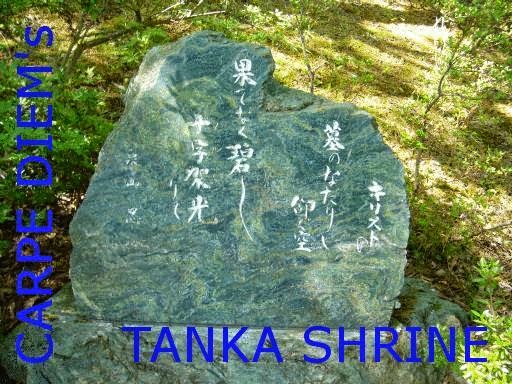 A new episode of our Tanka-feature ''Carpe Diem's Tanka Shrine". Several weeks ago I started this new feature and I became really happy to read all your wonderful responses on this Tanka feature. Tanka looks very similar with the Tan Renga, but there's a difference. Tan Renga is a chained poem written by two poets and Tanka is written by one poet. So this 'form' looks familiar I think.
The goal of the Tanka Shrine is to write a new Tanka inspired on the one I gave ... just as we are doing in our Carpe Diem Specials.

For this episode I have chosen a Tanka by Ishikawa Takuboku. Takuboku Ishikawa (1886 –1912) was a Japanese poet. He died of tuberculosis. Well known as both a tanka and "modern-style" (新体詩 shintaishi?) or "free-style" (自由詩 jiyūshi?) poet, he began as a member of the Myōjō group of naturalist poets but later joined the "socialistic" group of Japanese poets and renounced naturalism.(Source: Wikipedia)

I love to share this Tanka written by Takuboku for your inspiration:

On the white sand
Of the beach of a small isle
In the Eastern Sea
I, my face streaked with tears,
Am playing with a crab

It's a very sad poem, full of intense emotions, so it will not be an easy task to write a new Tanka in the same tone, sense and spirit as Ishikawa, but ... I have to try:

Hm ... I don't know, this looks more like a Kyoka, but I like this poem a lot. It's full of intense emotions. Yes ... this is a good poem (how immodest). And now it's your turn. Have fun, be inspired and share your Tanka in the same sense, tone and spirit as the one by Ishikawa Takuboku.
This episode of Carpe Diem's Tanka Shrine will stay on until December 10th 11.59 AM (CET) and is NOW OPEN for your submissions.