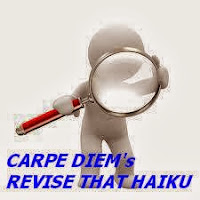 Another episode of Carpe Diem's "Revise that Haiku'. Another challenge to look at a different way to a haiku of the classical haiku-poets. This time I have choosen a haiku written by Yosa Buson (1716-1783), one the great four haiku-poets next to Basho, Issa and Shiki.
Buson was, next to being a poet also a painter of Haiga. In his haiku he paints with words sometimes even better. He illustrated once Basho's "Oku no Hosomichi" in the late 18th century.
The haiku to revise is the following:

a hand-ball,
wet with the spring rain falling
on the roof


And this is the scene which inspired Buson to write this haiku:

[...] All day the rain has continued. It seems that it has never begun and will never stop. The poet goes to the verandah and stands looking out at the melancholy scene. Caught in the gutter of the roof opposite is a ball made of cloth that children were playing with and that lodged there by accident. The rain pours down relentlessly upon it as upon everything else, soaking its pretty design and colours. The rain continues meaninglessly, uselessly to beat down on the ball. The ball continues meaninglessly, uselessly to be beaten on by the rain. The poet suddenly sees, almost without knowing it, a 'meaningless' meaning in this ball, in this rain, in all things. The ball grows sodden, and still the rain falls upon it, as though it were a thing that the rain could make blossom.[...]
This is the poetical life of the verse, the sheer lack of relation between the rain and the ball and the roof, - other than that of proximity. 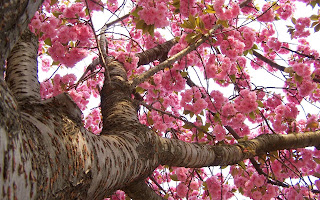 And now ... I have to try to revise that haiku ... not an easy task I think. This haiku by Buson gives me not so much to work with, but the scene gives me something to work with. And I came up with the following haiku:

Hm .. not an easy one to revise, a real challenge this is ... let me re-think this verse again and try another revision.

a ball left alone
in the muddy puddles -
fading colors 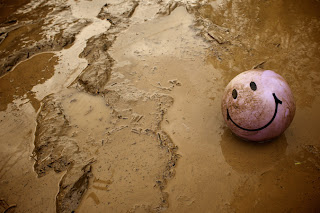 Well ... it's fun to look at an ancient haiku and try to revise that haiku. It's a way to learn to write haiku. So ... try it yourself.

This episode of Carpe Diem "Revise That Haiku" will stay on until Christmas Eve 11.59 AM (CET) and is NOW OPEN for your submissions. Have fun, be inspired and share your revised haiku with us all here at Carpe Diem Haiku Kai.