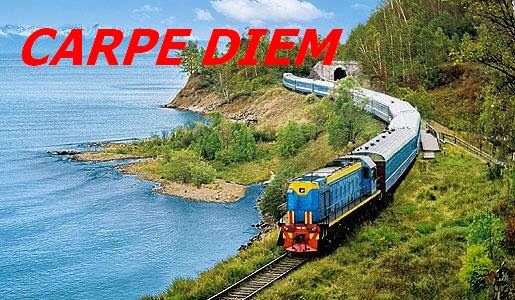 As I was preparing this new episode on our trip straight through the Soviet Union I realized that I was a step to far. Novosibirsk is laying ahead of us and I already shared a part of "Aleph" with you all in our last episode. So in this episode I will stay a bit longer at our idea of time. Say ... 'we are stuck' for a moment.
Time ... what is time? Time is flowing through our fingers like sand or water, we can't hold it. We can't stop it ... time is a "perpetuum mobile" it's always going on. As my weblogs continue to grow ... the lack of time becomes a threat ... I have to prepare these episodes (which I do love to prepare) inbetween all my other things as there is e.g. my work as an oncology-nurse and being a father and grandfather and of course a loving husband. So it's not always possible to prepare the episodes as I see them in front of my eyes as I am thinking about it, but ... I have to do what I have to do ... so today I love to share this episode of our daily haiku meme with you all.

Let me tell you something more about the Ob River. The Ob River, also Obi, is a major river in western Siberia, Russia and is the world's fifth longest river. It is the westernmost of the three great Siberian rivers that flow into the Arctic Ocean (the other two being the Yenisei River and the Lena River). The Gulf of Ob is the world's longest estuary. The Ob is known to the Khanty people as the As, Yag, Kolta and Yema; to the Nenets people as the Kolta or Kuay; and to the Siberian Tatars as the Umar or Omass. Possibly from Proto-Indo-Iranian *ap- 'river, water' (compare Tajik ob, 'water'). The Ob is used mostly for irrigation, drinking water, hydroelectric energy, and fishing (the river hosts more than 50 species of fish).

Paulo and Hilal are coming closer together and soon their commonly history will be revealed. Finally Paulo will complete his quest for himself and his deeper roots.

a shooting star
drawing a silvery line
on the black sky

Not as strong as had hoped, but it was a joy to write this set of haiku. It's giving me a feeling of loneliness and uplifting joy. As I see the shooting star I whispered a silent wish ... maybe it will come true.


a shooting star
I whisper a silent wish
and dream on