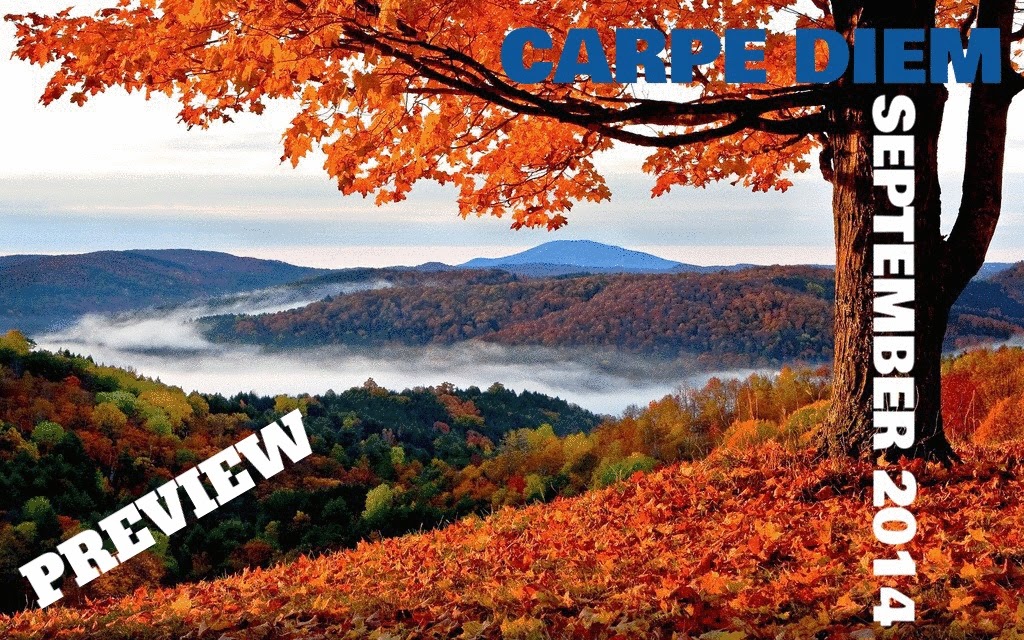 I love to give you a preview for this last part of 2014. First I will give you the issues which will be given attention to in this preview:

The first edition of our Carpe Diem Sea Shell Game

Every week we have the Tan Renga Challenge and for every TR-Challenge I ask our family-members to grant permission to use their haiku. Nothing wrong with that I think, but ... I love to do a proposal to change that 'asking for permission'. As you all know I always give credits to the haiku-poet whom has written the haiku which I use for the TR-Challenge and that (of course) is very logical, because they have written their haiku and have the right to be mentioned as the one who has the copyright.

My proposal is the following:

I can use your haiku without asking permission and I will always mention the one who has written it. This will make it a lot easier for me to choose haiku for the TR-Challenge, because I don't have always time to re-visit the websites and weblogs of the ones I have asked permission to use their haiku.
I love to hear from you all if it's ok that I use your haiku without asking permission. I promise that I always will give the credits to the one who's haiku I have used.

I have called this new feature "Carpe Diem's Ginko" and it's the idea to undertake a 'virtual' walk with each other through nature or through the neighborhood of our family-members. A 'ginko' is a haiku walk, usually as an organized group. However, it is not necessarily a group event and can be an enjoyable experience on one’s own. Set off on a walk with a theme in mind. Make sure you have a notebook and pen, or pencil, with you to make notes or write your haiku en route. Focus on the theme and your surroundings and you may surprise yourself at how observant you become of things both small and large.
This new feature will be soon has it's first 'maiden trip'.

Carpe Diem Haiku Kai, once started as "Carpe Diem, a daily haiku-meme", is closing in to it's second anniversary next October. As I am looking forward to that second anniversary than I think that will be another wonderful month of celebration. I am already busy to ask several well known haiku-poets to provide me with a Ghost Writer post and I think I will surprise you all with those GW-posts.
Of course there will be also the daily prompts and I think I will create a prompt-list with prompts we have had earlier in those two years of Carpe Diem Haiku Kai, so to say "there will be reprise prompts that month. For our CD-Specials in our anniversary month I have chosen for a classical haiku-poet who isn't that well known, but who has written/composed wonderful haiku. Those haiku will be a great source for your inspiration.
Of course I will publish our first results of our Sea Shell Game and the winner of that Sea Shell Game will be honored with being the haiku-poet for the CD-Specials of November 2014.
October will become really a festive month and I also will publish a few new features in our celebration month. Which new features that will be ... well you have to wait.

Other things worth mentioning

I am a proud host. It's really a joy to create Carpe Diem Haiku Kai and I am so happy to see new names appear on our Haiku Kai and I hope there will be more new names. It's a joy (and sometimes) a struggle to create all the posts, but it's all because of my passion for haiku.
Haiku is a wonderful way to expose your feelings, emotions and thoughts and it's like painting. Those three lines can bring a painting to life and that's what haiku is ... a painting with words.
Our Ghost Writer feature is one of the nicest features we have I think, but I need a few more GW-posts and I hope that there will be family-members who are willing to be a Ghost Writer for our Haiku Kai. You can email your GW-post to:

For the Sea Shell Game you can email your entree haiku to:

I am looking forward to the last part of this year and I hope to see you all as we are celebrating haiku at Carpe Diem Haiku Kai.