Carpe Diem's "Ask Jane ...", an introduction to a new feature! 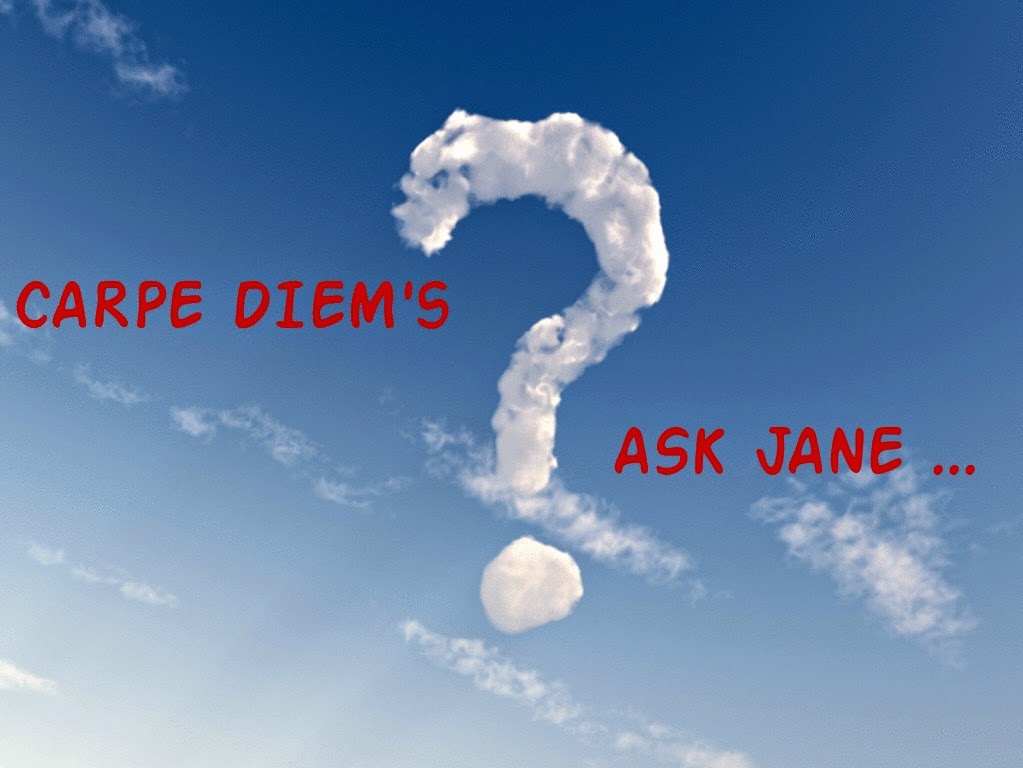 E-mail by Jane Reichhold which I got yesterday September 27th:

Yes, let's do this! Put up a note asking for questions. When one arrives I will do my best to answer it. If the question is one I have answered I will rewrite my previous answer to fit your site and person. Otherwise I will answer as soon as I can get something new written.  Here we go. Blessings on the endeavor.
I will write for you and your site as long as the questions come in and my health holds out!
\o/ Jane

As you all could read in the above e-mail by Jane Reichhold she has decided to become our host for a Special feature here at our Carpe Diem Haiku Kai. I had asked her, earlier this year, if she would be Ghost Writer for our second anniversary month next October. She has given it a thought and accepted my invitation to be a Ghost Writer. A while later she emailed me again with the question that wouldn't be "a ghost" and if it was an idea to start an all new feature hosted by her at Carpe Diem Haiku Kai.
You all will understand that I was (and still am) excited as I realized myself that Jane actually said: "I love being part of Carpe Diem Haiku Kai, but not as "a ghost", but as a real person, hosting a new feature".
That's why I had to publish the Carpe Diem Extra episode of yesterday and now I will first introduce Jane Reichhold to you all with a brief biography, than I will re-publish a short interview I had with her, when our contact started (last year, 2013). And third (and last) I will tell you what the goal will be of this new Carpe Diem "Ask Jane ..." feature and how it's gonna work.

A brief biography of Jane Reichhold:

Jane Reichhold is a haiku personality. There's a lot to know about her, as well as to learn from her. On her page (AHA!POETRY!) we learn that she was born in Lima, Ohio, in 1937, and studied Art and Journalism at Bluffton College, Ohio, Ohio University, Athens, Ohio, Fresno State University, Fresno, CA, and San Francisco State University, San Francisco. She lives now in Gualala, CA, USA.

She's also a mother of three children and taught art classes for children (1962-1966). She owned a pottery workshop studio in Dinuba, CA (1967-1971) and then she moved to Hamburg, West Germany, in 1971. There, she made sculpture from ropes which was exhibited throughout Europe. She became the first American woman artist accepted into the Deutsche Kunstlerbund [German Artists' Organization] and has written free-lance magazine articles and poetry since 1963 which, have been published in USA, Canada, England, Germany, Holland, Switzerland, Romania and Croatia.

She published a lot of books, so here are a few examples of her books:

Among her many achievements are:

## Leader of the Haiku Writers of Gualala Arts and publisher of their monthly Haiku Sharing for seven years.
## Founder of AHA Books, Publishing Company, in 1987.
## Publisher of Mirrors - International Haiku Forum, a magazine distributed worldwide 1988 - 1995.
## Editor of the Geppo, the periodical for the Yuki Teikei Haiku Society of United States and Canada, 1991 - 1994.
## Co-Editor of LYNX, a journal for linking poets with renga and tanka since 1993.
## In December 1995 she  (and her husband Werner) launched  AHA!POETRY on the web.
## Member of the Haiku Society of America, Haiku Poets of Northern California, Haiku Canada, Haiku International, Tokyo, Japan; the German Haiku Society, and Poetry Society of Japan.

### Twice winner of the Museum of Haiku Literature Award [Tokyo].
### Three-time winner of an Haiku Society of America.
### Merit Book Award: Tigers In A Tea Cup, Silence, and A Dictionary of Haiku.
### Winner of numerous haiku awards, including second place in the 1987 JAL contest and in the Itoen Tea Company Award in 1992.
### Her papers are being archived at the American Haiku Archives in the State Library of California, Sacramento, CA

A short interview I had with Jane Reichhold as our contact started back in 2013:

1.) When did you start writing haiku and was there a reason for that you decided to start with composing haiku?

JR: I first discovered haiku in 1967 by reading a Peter Pauper book, Haiku Harvest, translated by Peter Beilenson and Harry Behn in 1962. I was leery about the shortness of the poems, because I had been writing much longer free-verse, but the transfiguring moment came to me when I realized I could experience something like the Old Masters of Japan were describing in their haiku.
I was a potter at the time and to try out a newly-made kick wheel I was throwing pots outdoors. Just at the moment when my thumb and fingers began to draw the clay upwards, a mockingbird sang a trill. I felt as if it was the bird’s sound that made the clay rise up into a vessel. I instinctively felt this was the kind of experience should be preserved in a haiku. At that time, following the example in the book, I wrote my haiku using 5, 7, 5 syllables. And I thought I was the only non-Japanese writing in the form. I firmly believed that only the Japanese could write a haiku.
I few years later I moved to Germany and I continued to write what I called ‘haiku’ and shared them with my daughter. One day, while at the village dentist, I met Sabine Sommerkamp who was interning as an assistant to earn money to travel to the USA to meet haiku writers. From her I learned that there were several groups in the States as well as such well-known poets as Jack Kerouac and Allen Ginsberg who were writing haiku in English. Sabine and I discovered we lived only blocks apart and I began to learn from her while she wrote her doctorate on the subject and she later headed the feature for haiku in the magazine Apropos. Within a year Werner and I had begun living back in the States part-time and it was easier to meet with other haiku writers, to find the books they were reading and writing, and to subscribe to magazines here. [This is taken from an interview by Ami Kaye]

JR: I would agree with you there. I read and studied every translation of his work I could find. By working with Hatsue Kawamura on our own translations of Japanese tanka, I was finally able to do my own translations of all of Basho’s haikai which was published by Kodansha as Basho The Complete Haiku. Anyone reading the book, and especially the notes, would understand how and why I admire Basho so much.

JR: That is like asking a mother who is her favorite child.

JR: I never heard of Basho’s Kanshicho-style unless this name has been given to the poems he wrote in the Chinese style. Can you point me to some works mentioning this. A Google search only brings up your name.

Jane is an authority on haiku, tanka and several other forms of poetry. As you can read at AHA! POETRY! she also knows a lot about renga (chained-poem). She has written a lot of books and articles about haiku and she really does know a lot about haiku which she loves to share with Carpe Diem Haiku Kai and the world.
The goal for this feature? Well ... there is no goal just an opportunity to ask Jane all about haiku, senryu, tanka and renga. She will answer all of your questions about haiku and will write also new articles about haiku. She is a great haiku-poetess, maybe the greatest modern haiku-poetess, and can be a source of information and knowledge for you all.
So ... if you have questions for Jane than you can email them to the following email-address which I have created especially for this new Carpe Diem feature "Ask Jane ..." I will forward them (your questions) to Jane and she will answer your questions and email them back to me ... than I will publish them here at Carpe Diem Haiku Kai.

You can email your questions to:

I hope this new Carpe Diem Haiku Kai feature "Ask Jane ..." will become a great success. I am looking forward to your questions and I promise that I will forward them to Jane and publish the answers as soon as possible on our Haiku Kai.