It has been a while that I published a Carpe Diem Tokubetsudesu episode and that's not without reason certainly not this month. This tribute to Jane month had to be only about Jane Reichhold, but that wasn't possible, because of the "prayers" kukai results. So I choose to bring the CD-Specials and one Tokubetsudesu episode this month. I hope you all will understand that.

Our "runner-up" of the "prayers" - kukai was Ese and she became the "runner-up" with the following haiku, a beauty I would say:

Ese is a long time participant in Carpe Diem Haiku Kai and in an earlier kukai she was the winner and became the featured haiku poetess of November 2015. You can find her CD-Specials through clicking on the post list at the right of our Kai.

Ese is a very gifted haiku poetess and she publishes mostly on Twitter and Tumblr. And she created really wonderful haiku:

Ese has eyes for the most tiny things in nature and around her, here is an example of a haiku by Ese in which you can read this: 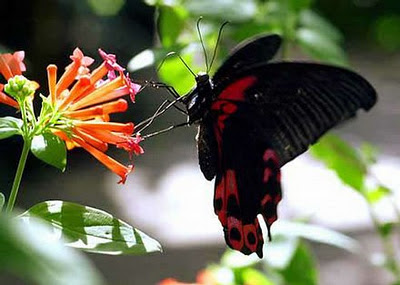 And to conclude this Tokubetsudesu about Ese I have a nice series of "butterfly"-haiku for you written by her:

velvet touch of wings
among evergreen vines
my palm blossoms

butterfly house-
so still on the glass ceiling
does he long for the sky?


© Ese
And these beauties conclude this episode. I hope you have become inspired through these beautiful haiku by Ese ... I am looking forward to your responses ... have fun!

Ah! those cherry blossoms
everywhere I look their beauty amazes me again -
finally spring is here

And another one inspired on Ese's "butterfly" haiku:

fragile shadow
dances on the white wall
a Holly Blue

This episode is NOW OPEN for your submissions and will remain open until September 19th at noon (CET). I will publish our new regular episode, summer solstice, immediately hereafter.