As I started with Carpe Diem Haiku Kai I introduced several special features to you for your inspiration. And every week we had a Tan Renga Challenge in which I challenged you to create / complete a Tan Renga from a given haiku by a classical or non-classical haiku poet / ess. Today I have a nice Tan Renga Challenge for you that I published on December 20th 2013. It was a haiku by Jane Reichhold, my mentor and once my co-host at CDHK. As you all know she died in 2016 and she is still missed every day. So this episode is in a way a tribute to her, the Queen of Haiku and Tanka.


As you see in the title of this episode, into the sea, is the "title" of the haiku by Jane Reichhold to work with to create a Tan Renga.

melting into the sea
the full moon
leaves a candle bright

And this is the second stanza I created back in 2013 to make this a Tan Renga: 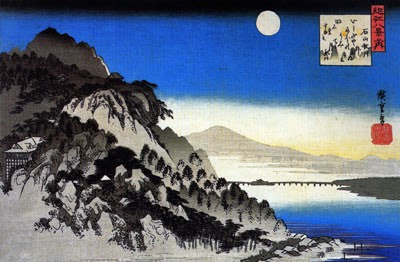 For those who are new here. A Tan Renga is a short chained poem written by two poets. It looks very similar with Tanka, but Tanka is written by one poet. You have to write the second stanza through associating on scenes in the haiku (the starting verse).

So let me bring the above Tan Renga created by Jane and my together:

Well enjoy. Create a Tan renga with the given haiku by Jane Reichhold to honor her. This episode is NOW OPEN for your submissions and will remain open until October 16th at noon (CET). I will try to publish our new episode, Ryuko-ji, later on. For now ... have fun!