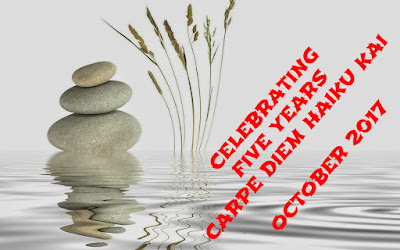 What a joy to create a new episode for our festive anniversary. Last year (2016) we lost one of the most famous and renown modern haiku poets. Jane Reichhold died at the end of July and around that time I created that special feature "Universal Jane". That feature was all about Jane and her wonderful legacy. In one of those episodes I tried to inspire you through haiku in which we can find love, erotics, sensuality and sexuality. Jane created several haiku about those themes and she did that in a wonderful way, not hidden, but our in the open.


Earlier this month I tried to inspire you with "love" as prompt and I told you that haiku isn't really the form to bring sexuality, sensuality and love in. Those themes were more for tanka, or it's pre-form waka, love poems between lovers, between secret lovers.

Here are a few haiku created by Jane Reichhold in which you can find those themes:

a time of beaches
abalone shells and lovers
without memories

making love
the jack-o-lantern also
grins in the dark

shadows moving
on the bedroom wall
a pumpkin’s eyes

Jane is still missed, but her spirit lingers here at Carpe Diem Haiku Kai. I feel a bit lost without my dear friend and mentor Jane Reichhold, but she would have me to go on that's for sure.

I found the following haiku in my archive, I think you can remember this one:

This episode is NOW OPEN for your submissions and will remain open until October 31st at noon (CET). I will try to publish our new episode, symphony no.11, later on. For now ... have fun!