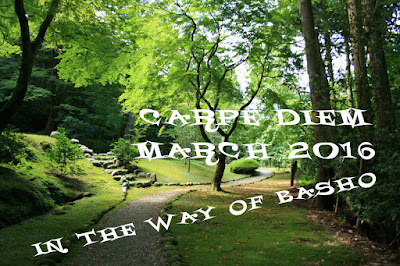 This month we are exploring haiku writing techniques used by Basho, my sensei. And I am happy to announce to you all that I will create a CDHK e-book "In The Way of Basho" in which I will gather all the posts about the haiku writing techniques used by Basho and the CD-Specials in which I introduce disciples of Basho, the so called "Shoomon disciples" or "Shoomon school". Next to all the posts I will include your submissions to every post at the end of every chapter (episodes). You can already find a preview at the right side of our Kai, free for download.

Okay ... back to our haiku writing technique for this episode. In this episode I love to introduce "kasuri" or "frame rhyme".

To understand this "kasuri" technique I also will give you the Romaji translation of this haiku:

By the way this is an early haiku by Basho which he wrote at the age of 22. In this haiku we can already see the splendor of the master.


This technique, used by the two haikai schools in vogue in Basho's time (Teimon School and Danrin School), was also utilized in English poetry, where it was also known as the "para-rhyme". An example would be back - buck. This rhyming device had almost completely fallen out of practice in poetry but was recently revived in rap-music. An extension of this technique is still used in jokes. By taking a known phrase or cliché, and then changing one part of it, it is possible to express a new idea. Examples: "He who laughs last thinks slowest." or "Change is inevitable, except from a vending machine". Basho, by changing only one sound unit, was using the frame rhyme.

At the time there was a saying that Kyoto has 98,000 houses. Another phrase is kisen kunju ("a crowd of rich and poor"). Basho changed the kisen to kusen to add another thousand to the number and include the concept of all classes of society.

I think this is a wonderful haiku writing technique, but if you don't mind "I pass" this time to create a new haiku myself, because my English isn't that well to use this "kasuri" or "frame-rhyme" technique. I also think it isn't an easy technique to use ... so .... good luck.

This episode is NOW OPEN for your submissions and will remain open until March 19th at noon (CET). I will try to publish our new episode, heart, later on. For now ... have fun!