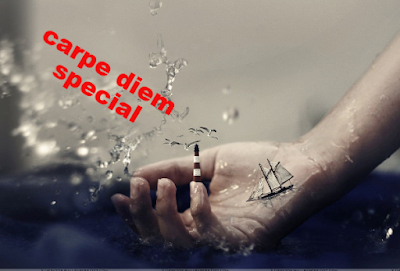 This is the third CD-Special of this month and as you all know this month our featured haiku poetess is Sara McNulty of "Purple Pen in Portland". She is a very gifted haiku poetess, but she also writes haibun and kikobun.

For this CD-Special I have chosen a kikobun which Sara wrote in response on one of the CD-Specials of February 2016. Our featured haiku poet then was Hamish "Managua" Gunn and in that same month Chèvrefeuille's Publications published an exclusive CDHK e-book with kikobun written by Hamish.
In the last CD-Special of February 2016 I teased you with a kikobun from that CDHK e-book by Hamish "Shinrin Yoku". It goes to far to include the whole kikobun which I shared then, but I think it's for sure a 'must' to share the haiku from that kikobun here, because that was Sara's inspiration for this kikobun which I have titled after the first line of her haiku "taste of nature".

Here is the haiku by Hamish:

And this is Sara's response ... in my opinion a beautiful kikobun.

A child in summer, carrying a tin pail, runs down a dirt hill where blackberries, fat and ripe, cluster together ready for picking. She places some in the pail, some on her tongue, where warm juices burst, and stain her mouth purple. Bzz! Bzz! Ouch! A jealous bee stings her on the leg.


And here is your (our) challenge for this CD-Special: Try to create a kikobun inspired on the one by Sara or if you can't come up with a kikobun, of course no problem, a haiku or tanka is also great to read.

Here is my attempt, not a kikobun, but an older haiga which I made several years ago.

And I have a nice haiku also from my archives:

This CD-Special is NOW OPEN for your submissions and will remain open until April 23rd at noon (CET). I will try to publish our new episode, rain / raindrops, later on.