Welcome at a new episode in our Carpe Diem Theme Week "Magnolia Blossoms, haiku by Soseki Natsume". This is already the fourth episode, so we are halfway this third Theme Week.

As I was preparing this Theme Week I dived into the life of Soseki Natsume, a contemporary of Shiki, and found wonderful haiku, but I also found several books and novels he wrote. The haiku for today is extracted from the novel "Zen Haiku: Poems and Letters of Natsume Soseki", by Natsume Soseki translated by Soiku Shigematsu.


watch birth and death:
the lotus has already
opened its flower.

From the back-cover of this novel:

"One of the greatest of Japan's modern novelists, Natsume Soseki was also an outstanding poet, calligrapher, and painter. For this translation, the translator has carefully chosen from Soseki's haiku those conveying the author's unique sense of both the individualism and universality of Zen, as well as it's vitality. To these have been added selections from Soseki's extended conversations with Zen monks, as well as anecdotes from his life and examples of his own calligraphy and painting."

Soseki, meaning stubborn in Chinese, was a nom de plume. Here's a haiku of springtime and the refusal to conform that just occurred to me as my car idled at a weeded wonderland of a road median today: 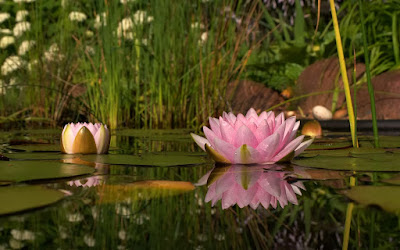 About "watch birth and death", the above haiku, I found a review by Ivan M. Granger at Poetry Chaikhana:

This poem is a powerful haiku.

Birth and death, they are a given, unavoidable. Often seekers assume that in the limited timeline strung between those two points, they must race to make the lotus flower of awareness open. But Soseki's Zen practice has revealed a fundamental truth: By contemplating birth and death with a truly still mind, one realizes that the lotus does not need to be opened; independent of death and birth and the thin space of time between them, the lotus is already open! Awareness naturally and always IS. We don't become awakened, we just notice that we already are awakened. "The lotus has already / Opened its flower." [...] (Ivan M. Granger)

What can I say more about the beauty of this haiku? I rest my case ...

And now it's up to you, my dear Haijin, visitors and travelers, to create an all new haiku, tanka or other Japanese poetry form inspired on this beautiful haiku by Soseki Natsume (or Natsume Soseki).

As you maybe know I love to create haiku about cherry blossoms, sunflowers, clouds and more, but I also created a few about lotuses. I dived into my archive to share a few of those with you in response on this CD Theme Week episode.

hummingbird
chases for honey in the Lotus
in Buddha's hands 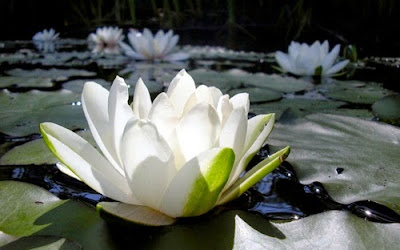 And to conclude this wonderful episode of our third CD Theme Week in which we explore the beautiful haiku by Soseki Natsume I have another haiku, this time a cascading one:

It has become a little to long episode I think, but I wasn't aware of the many haiku and tanka I wrote about Lotuses ... sorry I was on a roll.

This episode of our Third CD Theme Week "Magnolia Blossoms, haiku by Soseki Natsume" is NOW OPEN for your submissions and it will remain open until April 22nd at 10.00 PM (CET). Have fun, be inspired and share your haiku, tanka or other Japanese poetry form with us all here at Carpe Diem Haiku Kai, the place to be if you like to write and share haiku.