Welcome at the third edition of the Carpe Diem Haiku Kai Theme Week in which we explore a week long a theme. This Theme Week I have chosen to introduce a not so well known haiku poet to inspire you.
As you all (maybe) know I create an exclusive CDHK e-book after every Theme Week in which I also gather the responses of our haijin, visitors and travelers by. For this Theme Week I will do that also. By participating in this Theme Week you grant me permission to use your haiku. Of course I will take care for the copyright and so on. 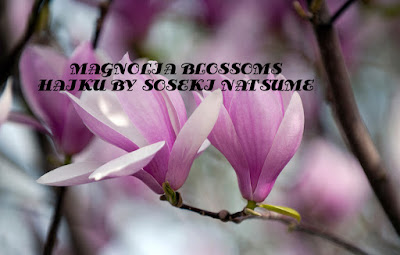 Let me first tell you something about Soseki Natsume:


Sōseki Natsume (February 9, 1867-December 9, 1916) was born Natsume Kinnosuke. He is widely known as the foremost Japanese novelist of the Meiji period. He was a scholar of British literature and a composer of haiku, Chinese-style poetry, and fairy tales. From 1984 to 2004, his portrait was featured on the Japanese 1000 yen note.

Natsume Kinnosuke was born in Babashita in the Edo region. He was adopted by a childless couple, but after their divorce, he was returned to his biological mother at age 9. However, his mother died only five years later.
While attending First Tokyo Middle School, he was enamored with Chinese literature. He went on to study architecture at Tokyo Imperial University.
In 1887, he met Masaoka Shiki who encouraged him to become a writer. From that point on, he chose the pen name Sōseki which means "stubborn" in Chinese. In 1893, he became a part-time teacher at the Tokyo Normal School while he studied as a graduate student.
Natsume began teaching at Matsuyama Middle School in 1895. During this time, he began publishing his haiku and Chinese poetry.

the sky I see
seems full of
magnolia blossoms

A very nice haiku I would say and I hope it will inspire you to create haiku, tanka, haiga, haibun or another Japanese poetry form.

blossoming Magnolia
one of its branches scattered -
on the credenza

Well ... I hope you did like this first episode of our new Carpe Diem Theme Week "Magnolia Blossoms, haiku by Soseki Natsume" and I am looking forward to your responses. Have fun ... and remember there will be an new exclusice CDHK e-book after this Theme Week.

This episode is NOW OPEN for your submissions and will remain open until April 19th 10.00 PM (CET). See you tomorrow for our second episode of CD Theme Week.