Peace be with you. What does it mean to say that? Well ... I think it's a wonderful greeting, because I wish you all peace of heart, mind and soul. This was what made me doubt if I should do a whole CDHK month about the Quran, the Holy Book of Islam. I love everyone unconditional and therefore I also love muslim, but as you all know the last years Islam became a feared religion through IS and that made me sad and doubtful. After thinking it over and over again I decided to create this month full of the wisdom from the Quran. Of course it's not my goal to convert you to Islam, but the Quran is a wonderful Book full of wisdom. Given to the world, especially for muslim, but there are also wonderful words in the Quran that can give peace of mind to everyone, not only muslim.

This month I love to share with you the wonders and beauties of the wisdom in the Quran and of course I will, without losing respect for the Quran, try to find similarities between the religious books we all know. (By the way as you have noticed maybe, I don't use Allah, but God, in our episodes. Not to be disrespectful, but because my philosophy is stated on the idea "All Gods Are One God". 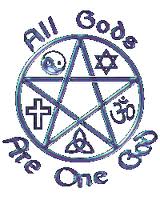 Today I have chosen a verse from Surah 4: Ayah 1 (an-Nisa' or "women"). In this verse we can easily see the story of Adam and Eve as we know it from the Bible. Let me give you first the mentioned verse:

[...] "O people! Fear your Lord, who created you from a single soul, and created from it its mate, and propagated from them many men and women. And revere God whom you ask about, and the parents. Surely, God is Watchful over you." [...] (Surah 4: Ayah 1)

And this is what the Bible says about this:

[...] "So the Lord God caused the man to fall into a deep sleep; and while he was sleeping, he took one of the man’s ribs and then closed up the place with flesh. Then the Lord God made a woman from the rib he had taken out of the man, and he brought her to the man.

“This is now bone of my bones
and flesh of my flesh;
she shall be called ‘woman,’
for she was taken out of man.”

The creation of mankind is in both scriptures the same, the only thing is the use of the words, but in it's origin the stories are alike.

As I said in earlier posts, Islam is a young religion and there are a lot of similarities with other religions. I however respect the idea that the Quran was given to Muhammed. Is it possible without being disrespectfull to look at this somewhat closer?

In my opinion, without being disrespectfull, I think that Muhammed was a very wise man seeking for inner peace and was wandering around the world to find peace of mind. Than he ran into all the different beautiful religions and philosophies and wrote it down? But isn't that the same statement I have made about the Bible? Because if we look at e.g. Jesus Christ, it sounds like Krishna. Hinduism is in my opinion the oldest religion on earth, except of course the religion of nature.

Isn't that wonderful in this short episode I said "All Gods Are One God" and if we look closer to all the different kinds of religions and analyze them we always arrive at the idea of only one God.

What a story this is ... and what a joy to read this in both the Quran and the Bible. God works in mysterious ways.

I also love to share how man and woman were created according to Hinduism, just to give you an idea, that there are similarities between all the religions:

[...] "He (Yājñavalkya) was not at all happy. Therefore people (still) are not happy when alone. He desired a mate. He became as big as man and wife embracing each other. He parted this very body into two. From that came husband and wife. Therefore, said Yājñavalkya, this (body) is one-half of oneself, like one of the two hálves of a split pea. Therefore this space is indeed filled by the wife. He was united with her. From that men were born." [...] (Brihadaranyaka Upanishad 1.4)

This episode is open for your submissions tonight at 7:00 PM (CET) and will remain open until March 12th at noon (CET). I will try to publish our new episode later on. For now ... have fun, be inspired and share your Japanese poetry with us all.