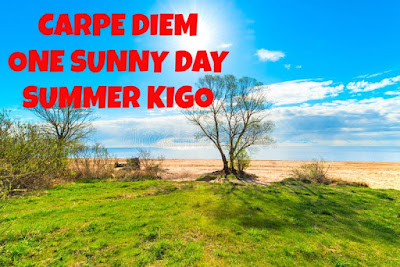 Well ... it's time for a new month of Carpe Diem Haiku Kai, the place to be if you like to write and share haiku, tanka or other Japanese poetry form. This month I love to inspire you through the classical seasonwords (kigo) for Summer (and Winter). Why have I chosen for this theme? Well ... as you all know haiku has several classical rules as you can read above in Carpe Diem Lecture One (1), This month I hope to read wonderful haiku, tanka or other Japanese poetry form that are following the classical rules as you can find above in the menu.

Why two seasons this month well that needs no real explanation, but I will give you it ... On the Northern Hemisphere, where I am living, we are entering Summer, but on the Southern Hemisphere they enter Winter. Because my part of the world is entering Summer all the prompts will be of Summer, but I will give you also a classical prompt for Winter. For this first episode of June 2018 that will be Indian summer (koharu).

The first prompt for this month of Summer kigo is barley autumn (mugi no aki) and it refers to the time in which barley ripens. In Summer this cereal grain ripens to the form in which we know it and use it after harvesting it.

Around my hometown we have several farms that produce this cereal grain and it is always awesome to see how it is harvested. My dad, he rests in peace, was once a farmer so I grew up with this cereal grain and the time of harvesting. As my dad was harvesting the barley he was almost the whole day on the fields and we (my brother and I) missed him. But in the weekends he wasn't busy with harvesting and did all wonderful things with us. Yes ... I have wonderful memories of that time.

I found a nice haiku by my sensei, Matsuo Basho, in which this summer kigo is used and I love to share that one with you here in this first episode of June:

A wonderful haiku I think in which you can see, hear and feel the essence of this classical kigo for summer.


It inspired me to create the following haiku:

It has become a nice haiku I think, but I don't really know if I did right to the kigo given to use.

This episode is NOW OPEN for your submissions and will remain open until June 7th at noon (CEST). I will try to publish our new weekend meditation later on. For now ... have fun, be inspired, create and share.