Carpe Diem #1470 A Wild Ride, the story of the Batavia 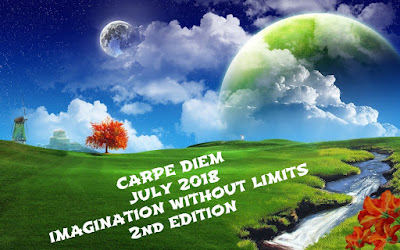 I love to tell you a little bit more about my hometown, Lelystad The Netherlands. Lelystad is the capital of the province Flevoland. Flevoland is all polder (land created from the bottom of the sea). It's a huge province, but our history isn't very long. It goes "only" back to the sixties. My parents, me and my brother moved to Lelystad in 1968 and my family is still living here. We have seen our hometown grow to the city we are now.

One of the great prides of my hometown is a replica of the V.O.C ship Batavia. It was built on our coastline and even now the shipyard were the Batavia was built is still in business and is now building a replica of another ship of the VOC, The Seven Provinces.

Let me first give you the image you have to use for our Imagination episode of today. It's a photo taken just around the corner were I live on the shipyard of the Batavia.

The above image shows how the Batavia rests at our coast just around the corner were I live. It's a wonderful ship and it's open for the public. I have been on it several times and for sure it feels like you are back in time, but the story behind the Batavia isn't something to be proud on as Dutch people. Let me tell you a little bit about Batavia's history.

Madness, mutiny and murder. The story of the Batavia is a wild ride.

The history of the Batavia Shipwreck is one of great intrigue not only for its brutality and gore but the 'Lord of the Flies' esque feel the story has. So much so, that countless books and films have retold the horrific event. The most recent venture coming from Russel Crowe after he bought the rights to Hugh Edwards' book "Angry Ghosts."

It might sound like the plot of an implausible Hollywood blockbuster, but the terrible tale of the Batavia is frighteningly real.
In October 1628, the Dutch East India Company’s Batavia set sail from the Netherlands to Batavia on her maiden voyage, with a cargo that included vast amounts of jewels and coins.
After making her way south, the Batavia struck a reef just 40 kilometres off the coast of Western Australia, near the Houtman Abrolhos Islands, in June 1629.
As the ship began to sink, most survivors made their way to a nearby island, which would later become known as Batavia’s Graveyard.
But the Batavia’s Commander Francisco Pelsaert surfaced on a smaller island nearby.
After discovering the islands were barren, Pelsaert, his skipper and 35 other men left the islands for Batavia, now known as Indonesia, in search of help, food and water.

Once his commander had departed, Under merchant Jeronimus Cornelisz began to plot a mutiny.
His original plot to mutiny and seize the ship had been made before the wreck, but the Batavia had sunk before Cornelisz could put his plan into action.
Cornelisz and his motley crew of mutineers sent anyone who might oppose their plans to other islands in search of water.
Beginning with the weak and injured, Cornelisz and his men began their mass murder. With their bloodlust still not satisfied, the mutineers hunted down the men sent to other islands. In total, 125 men, women and children were massacred.
Cornelisz kept some women alive to be repeatedly raped and tortured.
One man managed to escape and swim to the men sent to find water on Wallabi Island.
With the alarm raised, word was sent to Pelsaert when he returned from Batavia in a rescue ship.

While still on the island, the mutineers were tried for the murders. After ten days of torture, they confessed and were convicted. Seven men were hanged and two were sentenced to marooning on the Australian mainland, making them the first ever recorded European settlers. (Source: National Geographic Channel)

It's not a story were we the Dutch are proud off, but it's nevertheless part of our history. The replica of the Batavia is one of the most attractive sightings in my hometown and millions have visited her.

This episode is open for your submissions tonight at 7:00 PM (CEST) and will remain open until July 15th at noon (CEST). I will try to publish our new episode later on.