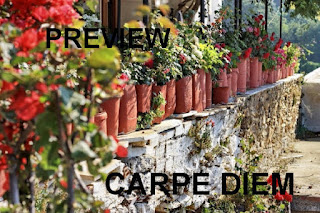 As a reaction on Kaykuala's post for today's prompt 'rainbow' I have chosen to insert a week in November with prompts about rainbow and the colors of the rainbow. I think that week will be as colorful as the rainbow.
Earlier today I was on You Tube searching for some nice music vid's to use in my new posts. I ran into a video by Loreena McKennitt, a Irish singer, titled 'Mummer's Dance. A wonderful song. I didn't know what a Mummer's Dance was, so I searched the Internet. I found really interesting information which I will use in one of the new prompt for November 'Mummer's Dance'. Here below I will share this video.

As I did in October ... I also will include a few Carpe Diem special prompts. This month this 'specials' are haiku written by Kobayashi Issa, for short 'Issa'. Issa was born in 1763 and died in 1827. He's known for his childlike candor in his haiku. He also was a 'broken' man during his lifetime. He lost several children at young ages. And he was a Buddhist priest of the Jodo Shinshu sect. His 'nom de plume' Issa means 'cup of tea'. I will tell you more about Issa when the first Carpe Diem Special will be on.


He's one of the four great haiku masters (Basho, Issa, Buson and Shiki). One of his haiku is really nice. (As they all are by the way).

trusting the Buddha, good and bad,
I bid farewell
to the departing year

I have to write a haiku inspired on this one, sorry (smiles)

For closure ... I have included in the new list of prompts the 'Full Beaver Moon', this is the name of the November full moon, which will occur on November 28th (in my region of the world).

Have a good week, enjoy writing your haiku, be inspired and please ... if you post a haiku for Carpe Diem ... leave a comment.