Dear Haijin, visitors and travelers,
Today another wonderful prompt ... Nightingale ... The Nightingale is a wonderful bird, it's not very colorful, but notwithstanding the lack of color ... it has the most wonderful voice. In classic Japan the Nightingale was a beloved bird to hold in a cage at home or court. Maybe you know the fairy tale of the Nightingale at the court of the Chinese Emperor. A beautiful story ...
I love to share that fairytale with you here.


Once upon a time in China there was a great emperor. His palace was the most beautiful in the world, and was surrounded by a garden with the most beautiful flowers. They had pretty silver bells tied to them, which tinkled so that everyone who passed could not help noticing them. Nearby, there was a forest that was home to a nightingale that sang so beautifully even the fishermen, who had so much to do, would stop to listen.
Travelers from every country in the world came to the city of the emperor, which they admired very much. When the visitors heard the nightingale, they all declared it to be the most wondrous of all.
The emperor had never heard of this nightingale. When he heard travelers speak of it, he said, “What is this? I know nothing of any nightingale. Is there such a bird in my empire?”
The emperor demanded that the nightingale be brought to him.
But where was the nightingale to be found? All of his lords-in-waiting looked high and low for the famous bird but were unable to find it.
At last, a poor little girl in the kitchen said, “Oh, yes, I know the nightingale quite well; indeed, she can sing. She lives down by the seashore.”
“Please lead us to the nightingale,” said a lord-in-waiting. So she did.
“My excellent little nightingale,” said the lord-in-waiting, “I have the great pleasure of inviting you to a court festival this evening, where the emperor can hear your charming song.”
“My song sounds best in the green wood,” said the bird. But still she came willingly when she heard the emperor's wish.
At the festival, the nightingale sang so sweetly that tears came into the emperor's eyes and rolled down his cheeks. Her song touched everyone's heart.
The nightingale's visit was so successful that she was now to remain at court, to have her own cage, with liberty to go out twice a day and once during the night. Twelve servants were appointed to attend her on these occasions. Each servant held her by a silk cord fastened to her leg. There was certainly not much pleasure for the nightingale in this kind of flying.
One day the emperor received a large packet on which was written, “The Nightingale.” Inside was an artificial nightingale made to look like the living bird and covered with diamonds, rubies, and sapphires. As soon as the artificial bird was wound up, it could sing like the real one and could move its tail, which sparkled with silver and gold, up and down. It was a gift from the emperor of Japan.
This new bird was as successful as the real bird, and it was even prettier to look at. It sang without ever getting tired. The people would gladly have heard it again, but the emperor said the living nightingale should sing something. But where was she? No one noticed when she flew out of the open window, back to the forest. 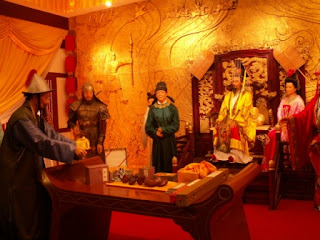 The emperor missed the real nightingale, but the music-master praised the artificial bird. He said it was even better than a real nightingale, not only because of its beauty but also because of its musical power.
“With a real nightingale we can never tell what is going to be sung, but with this bird everything is settled. It can be opened and explained, so that people can understand how the waltzes are formed, and why one note follows upon another,” said the music-master.
So, the real nightingale was banished from the empire, and the artificial bird placed on a silk cushion close to the emperor's bed. A year passed, and the emperor, the court, and all the people knew every little turn in the artificial bird's song. For that same reason, it pleased them better. They could sing with the bird, which they often did.One evening, when the artificial bird was singing and the emperor lay in bed, something inside the bird popped. Then a spring cracked and the music stopped.
The emperor immediately sprang out of bed and called for his doctor. But what could he do? Then they sent for a watchmaker. After a great deal of talking and examination, the bird was sort of fixed. But the watchmaker said that it must be used very carefully because the bird's mechanism was getting old and it would be impossible to put in a new one without injuring the music. The bird could only be played once a year.
Five years passed, and a real sadness came upon the land. The emperor was ill and not expected to live much longer. Cold and pale, he stayed in his royal bed. One day, the emperor awoke with a strange weight on his chest. He opened his eyes and saw Death sitting there. He had put on the emperor's golden crown, and held in one hand his sword of state, and in the other his beautiful banner. All around the bed and peeping through the long velvet curtains, were a number of strange heads — some very ugly, and others lovely and gentle-looking. These were the emperor's good and bad deeds that now stared him in the face.
Death continued to stare at the emperor with his cold, hollow eyes, and the room was fearfully still. Suddenly there came through the open window the sound of sweet music. Outside, on the branch of a tree, sat the living nightingale. She had heard of the emperor's illness and had come to sing to him of hope and trust. And as she sang, the shadows grew paler and the blood in the emperor's veins flowed more rapidly, giving life to his weak limbs. Even Death himself listened, and said, “Go on, little nightingale, go on.”
“Then will you give me the beautiful golden sword and that rich banner? And will you give me the emperor's crown?” said the bird.
Death gave up each of these treasures for a song, and the nightingale continued her singing. Soon, Death floated out through the window in the form of a cold, white mist.
“Thanks, you heavenly little bird. I know you well. I banished you from my kingdom once. Yet you have charmed away the evil faces from my bed, and banished Death from my heart. How can I reward you?”
“You have already rewarded me,” said the nightingale. “I shall never forget that I drew tears from your eyes the first time I sang to you. These are the jewels that rejoice a singer's heart. But now sleep, and grow strong and well again. I will sing to you again.”
And as she sung, the emperor fell into a sweet sleep. When he awoke, he was strengthened and restored.
“You must always remain with me,” said the emperor. “You shall sing only when it pleases you; and I will break the artificial bird into a thousand pieces.”
“No, don't do that,” replied the nightingale. “The bird did very well as long as it could. Keep it here. I cannot live in the palace, but let me come when I like. I will sit on a bough outside your window, in the evening, and sing to you.” Then the nightingale flew away.
The servants now came in to look after the emperor. To their tremendous joy and astonishment, there he stood, healthy, saying a happy good morning. (Source: Nightingale, a fairytale 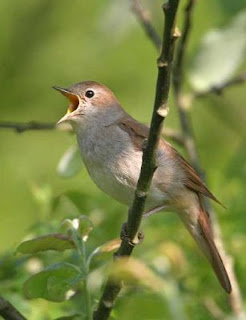 A wonderful fairytale don't you think? Maybe it helps you as a source for inspiration. Enjoy the fun, be inspired and share your haiku with Carpe Diem, Seize the day a daily haiku meme.
This prompt will stay on 'till October 22th 11.59 AM (CET). I will publish our new prompt, Sunflower, for October 22th today around 10.00 PM (CET).