It's with a feeling of sadness that prepare this episode. For now this is our last episode of our Carpe Diem Haiku Writing Techniques feature. Maybe later this year I will do another series of this special feature.
Today I love to give you all a resume of our Haiku Writing Techniques. What have we done in the last three months?

First we had Juxtaposition in which we discussed the images in haiku. In haiku there are mostly two opposite images, this is called "juxtaposition" as Robert Spiess (editor of 'Modern Haiku') says:


[...] “Juxtaposition of entities in haiku cannot be simply the throwing together of just anything; the poet must have the intuition that certain things, albeit of "opposite" characteristics, nonetheless have a resonance with each other that will evoke a revelation when they are juxtaposed in accordance with the time-tested canons and aesthetics of haiku.” [...]

wind of winter
touches the last flowers -
Ah! that perfume ...

In our second episode we explored Onomatopoeia or try to bring sound in your haiku by using specific characters. Western languages don't have really a "sound" as e.g. Japanese. Japanese is a language of sounds as we can see in the three-lined form of haiku with its 5-7-5 sound-units (or onji). Japanese people are part of nature, they are one with the sounds of nature and therefore haiku became what it is ... the poetry of nature ...
I had never heard of onomatopoeia until I discovered haiku in the late eighties, but I learned through the years that haiku are made, written, composed for saying aloud twice (or more times). Haiku are written down but the essence of haiku is this onomatopoeia. How we say a thing is of more importance, of more significance, than what we say, the conscious meaning; for through the tones of the voice, the words chosen, their combination, the sounds echoing and reechoing one another, their concords suspended and reestablished, their discords sustained and resolved, through all this there is a music as free and yet as law-abiding as is that of the flute, the oboe and the violin.

slow days passing, accumulating,
how distant they are,
the things of the past!

In our third episode we talked about repetition or the use of the same words in a haiku to make the 'painted' scene more intense. As we see e.g. in the haiku by our featured haiku poet Santoka Taneda or in the following by myself: 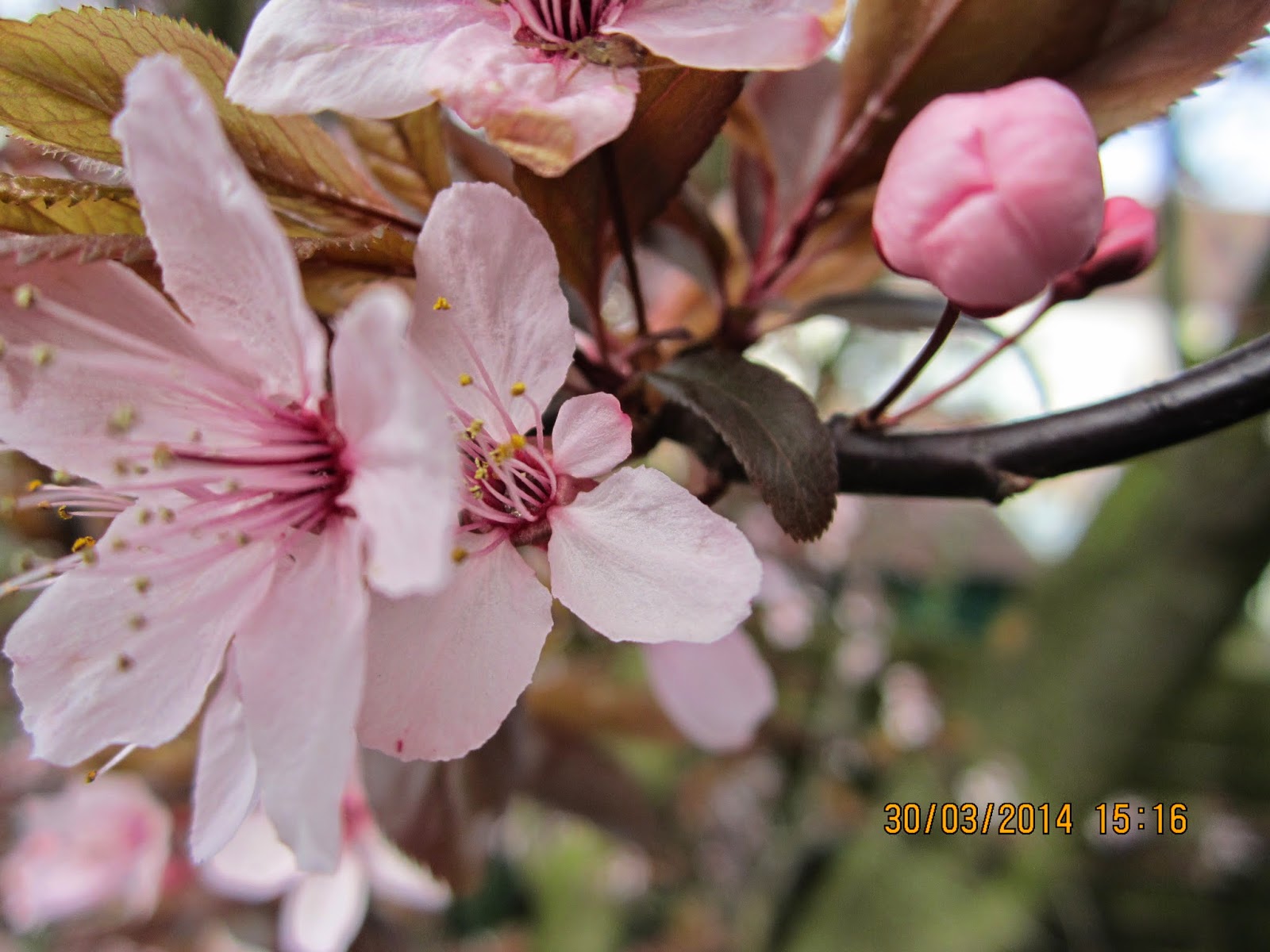 Surprise was the theme for our fourth Haiku Writing Technique and I used it to introduce another idea that haiku is an impression. That impression we explored further in February as all our prompts were about Impressionism.
"Surprise" is also part of haiku ... it's the "catching" of a moment as short as the sound of a pebble thrown in water ... e.g. the "frogpond"-haiku by Basho:

Comparison, this was our 5th HWT episode, is a nice way to write/compose haiku ... it brings you in a way immediately two lines and you have just to write a third line towards it to make your haiku complete.

Than we had a more difficult HWT Wabi-Sabi and it needed two episodes to expalin this Haiku Writing Technique, but finally we managed this technique.
Wabi refers to simplicity and humility. It's about being content with little. Wabi, stemming from the root "wa", which refers to harmony and tranquility, has evolved in meaning from describing something sad and desolate to describing something that is purposely humble and in tune with nature.
Sabi refers to the passing of time, which creates a feeling of sadness, longing and melancholy. It's about transient imagery, how things convey how they've lived - their age, their knowledge. Sabi by itself refers to the natural progression of time, and carries with it an understanding that all things will grow old and become less conventionally beautiful. However, things described as "sabi" carry their age with dignity and grace. At the heart of being "sabi" is the idea of authenticity.

You start by being part of the moment (as short as the sound of a pebble thrown in water), see the impression of the moment. Come in contact with the moment, BE the moment. Feel it, smell it, hear it, see it, touch it ... use all your senses to become one with the moment ... BE the moment. Let go all of your thoughts, make your mind empty, feel only the emptiness, be humble to the experience. It's a privilege to be in the moment. That moment grants you its permission to Be IN IT, be grateful to that.
Do you feel it? That's Wabi-Sabi, that's what haiku is. An example: 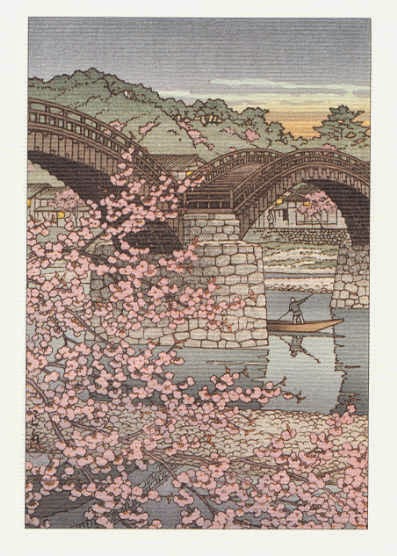 What followed was Basho's "task for life"-haiku writing technique Karumi (Lightness).
Bashô developed this concept during his final travels in 1693. Karumi is perhaps one of the most important and least understood principles of haiku poetry. Karumi can best be described as “lightness,” or a sensation of spontaneity. In many ways, karumi is a principle rooted in the “spirit” of haiku, rather than a specific technique. Bashô taught his students to think of karumi as “looking at the bottom of a shallow stream”. When karumi is incorporated into haiku, there is often a sense of light humor or child-like wonderment at the cycles of the natural world. Many haiku using karumi are not fixed on external rules, but rather an unhindered expression of the poet’s thoughts or emotions. This does not mean that the poet forgets good structure; just that the rules of structure are used in a natural manner. In my opinion, karumi is “beyond” technique and comes when a poet has learned to internalize and use the principles of the art interchangeably.
I think karumi can only be the concept for your haiku when you are not only a haiku poet, but also living haiku ... Living haiku is being one with the world around you including nature and enjoying the emptiness, loneliness and oneness of being part of nature as a human. A haiku poet (in my humble opinion) lives with nature, adores nature, praises nature and respects nature. Haiku is not only a wonderful poem ... it's a life-style.

just one leaf
struggles with the wind
like Basho

Recently, this month, we explored the 'free-style' haiku as written by Santoka Taneda. 'Free-style' haiku don't use kigo, kireji or the 5-7-5 structure. It looks somewhat like the Kanshicho-style on which had a discussion here last year.
'Free-style' gives you more freedom (and pleasure) in writing your haiku (or tanka) and I think that our Western way of haiku-ing is more like the 'free-style', but that's just my (humble) opinion.

And of course there was that episode which I maybe could have done as the very first episode of HWT, but I didn't do that, not on purpose ... I just hadn't thought about it as a haiku writing technique. That episode was titled "back to basic", but could even be titled "back to the roots of haiku". That episode was about the classical way of writing haiku (as e.g you can read in Carpe Diem's Lecture 1, above in the menu) and it was a joy to make that episode ... to me ... writing a classical haiku is always a challenge, but here I have a classical haiku written by me:

the rough landscape
reaches to the deep blue sky
so impressive

the old pond
yesterday ... Irisses bloomed
only a faint purple 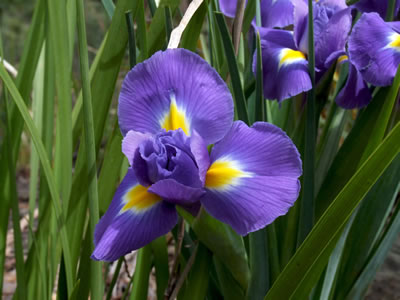 I hope you all did like this little course of Haiku Writing Techniques and I hope that the techniques we have discussed will give you all more 'handles' to enjoy haiku. For this episode you may choose which haiku writing technique you want to use for your submitted haiku. And  ... please share your choice of the technique with us.

This episode is open for your submissions tonight at 7.00 PM (CET) and will remain open until March 27th at noon (CET). I will try to publish our new episode, chess game, later on.