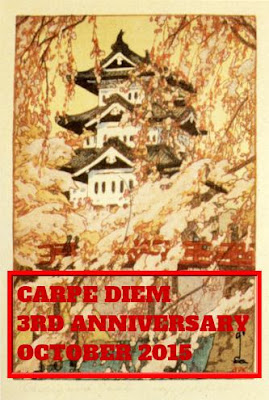 
!! CONGRATULATIONS !!
... with our third anniversary of Carpe Diem Haiku Kai and a Happy New Year. Welcome at our third anniversary month October 2015. Time to look back, but not to long. We are not living in the past or in the future, we are living NOW.
Back in October 2012 I started Carpe Diem Haiku Kai (than it was only called "Carpe Diem") to share my love for haiku and other Japanese poetry forms with the world. Back than the only thing I thought was "let me give it a try and start with a daily haiku meme". I never had thought that CDHK would be alive and kicking three years later, but ... we are here growing from toddler to teenager and with a lot more special features.
Back in 2012 I only had the regular prompts and the CD-Specials in which I introduced and shared haiku composed by a featured haiku poet/ess (classical and non-classical). In the first month that was (of course) Matsuo Basho (1644-1694), my haiku master.
During the time I created new features, some of them still in use and others vanished or landed in the closet. Last year (2014), following the warm-hearted family feeling of our Haiku Kai, I mentioned for the very first time our Kai "Carpe Diem Haiku Family" and in the mean time that "family"- idea landed in your hearts and in the hearts of my visitors and travclers by. I created several new parts for our "Carpe Diem Haiku Family" e.g weblogs on Wordpress. And I created places for our Carpe Diem Haiku Family at Twitter, Facebook and Tumblr and more recently I created a place at Pinterest and a new weblog at Sim-diff. This last weblog on Sim-diff is especially for Troiku.
This year we started with our CDHK kukai from which we have had four (the judging for our 4th kukai "peace of mind" is running at the moment) and we had our first Renga Party. We have really grown ... we have our e-books and (I hope) to launch our own CDHK-M, our merchandise webshop, soon.


Than we had of course that event that Jane Reichhold, a very famous haiku-poetess, became a kind of co-host for CDHK and gave me the exclusive rights to publish her e-books at our Haiku Kai. I am grateful that she gave me that opportunity. During the excistence of CDHK I had the honor to bring haiku by several well known, famous, haiku poets/esses from all around the globe e.g. Kala Ramesh, Jim Kacian and Garry Gay and this month, in which we celebrate our third anniversary, I have the honor that two well known and famous haiku poets have granted me permission to use their poetry and an essay, Michael Dylan Welch and Tom D'Evelyn. Both have gained their place in the world wide haiku community and I am grateful that they will be here (in words) at CDHK.

Earlier in this post I said that we are living now in the present ... I have looked back and now I love to give you a Sneak Preview of the future of our Haiku Kai.
This month I hope to open our CDHK-M webshop (Carpe Diem Haiku Kai-Merchandise) and I hope to open our own You Tube Channel. I am struggling with that channel, so this will take a little bit more time I guess.


I will create another weblog especially for Troiku, because the Sim-Diff weblog is just a kind of showcase, to give you the opportunity to respond on themes given with a Troiku. I also will create an all new feature Troiku World here at our Haiku Kai and also an all new feature about the Fibo-ku, both creative ways to write haiku which I invented.
Next month November we will go back to Central Asia, to Mongolia, the Altai Mountains were we will have a journey while riding on a horse. That month we will "read" another wonderful novel written by Paulo Coelho, The Zahir. The Zahir is one of his most beautiful novels and the story takes place in and around The Altai Mountains.
In December we will have all classical kigo for Winter based on the Japanese Saijiki's.

I hope to create two new e-books, one for our prize-winning poetess Ese, for the kukai "juxtaposition", and a special E-book about Troiku.
As you maybe know this month it's all about Japanese Festivals ... and Japan has a lot of them.

What can I tell you more ... at the moment nothing more I think, so I will end this episode New Year with the following haiku:

This episode is NOW OPEN for your submissions and will remain open until October 3rd at noon (CET). I will publish our new episode, Ohmato Taikai, later on. For now ... have fun!