I hope you have had a wonderful weekend and I hope you are ready for a new week full of prompts to work with themed Tibet ... a magical experience. In our first episode I published a haiku written by myself in which the prompt for today is already mentioned:

But what does this mean? What is the deeper meaning of this mantra? Or ... no ... let me tell you something about the background of this mantra so renown all over the world, but it started its "travel" from India to Tibet. (Hereafter I share a video in which Om Mani Padme Hum is sung. This video is created by Ellison in Wonderland)

A wonderful (and relaxing) mantra I would say. Okay let us dive in to the "matter" of this Tibetan mantra.

Tibetan Buddhists believe that saying the mantra (prayer), Om Mani Padme Hum, out loud or silently to oneself, invokes the powerful benevolent attention and blessings of Chenrezig, the embodiment of compassion. Viewing the written form of the mantra is said to have the same effect -- it is often carved into stones and placed where people can see them.
Spinning the written form of the mantra around in a Mani wheel (or prayer wheel) is also believed to give the same benefit as saying the mantra, and Mani wheels, small hand wheels and large wheels with millions of copies of the mantra inside, are found everywhere in the lands influenced by Tibetan Buddhism.
It is said that all the teachings of the Buddha are contained in this mantra: Om Mani Padme Hum can not really be translated into a simple phrase or sentence.
The mantra originated in India; as it moved from India into Tibet, the pronunciation changed because some of the sounds in the Indian Sanskrit language were hard for Tibetans to pronounce. An old story speaks about a similar problem.

The True Sound of Truth

A devoted meditator, after years concentrating on a particular mantra, had attained enough insight to begin teaching. The student's humility was far from perfect, but the teachers at the monastery were not worried.
A few years of successful teaching left the meditator with no thoughts about learning from anyone; but upon hearing about a famous hermit living nearby, the opportunity was too exciting to be passed up.
The hermit lived alone on an island at the middle of a lake, so the meditator hired a man with a boat to row across to the island. The meditator was very respectful of the old hermit. As they shared some tea made with herbs the meditator asked him about his spiritual practice. The old man said he had no spiritual practice, except for a mantra which he repeated all the time to himself. The meditator was pleased: the hermit was using the same mantra he used himself -- but when the hermit spoke the mantra aloud, the meditator was horrified!

"I don't know what to say. I'm afraid you've wasted your whole life! You are pronouncing the mantra incorrectly!"

"Oh, Dear! That is terrible. How should I say it?"

The meditator gave the correct pronunciation, and the old hermit was very grateful, asking to be left alone so he could get started right away. On the way back across the lake the meditator, now confirmed as an accomplished teacher, was pondering the sad fate of the hermit.

"It's so fortunate that I came along. At least he will have a little time to practice correctly before he dies." Just then, the meditator noticed that the boatman was looking quite shocked, and turned to see the hermit standing respectfully on the water, next to the boat.

"Excuse me, please. I hate to bother you, but I've forgotten the correct pronunciation again. Would you please repeat it for me?"

"You obviously don't need it," stammered the meditator; but the old man persisted in his polite request until the meditator relented and told him again the way he thought the mantra should be pronounced.

The old hermit was saying the mantra very carefully, slowly, over and over, as he walked across the surface of the water back to the island.

A wonderful story I would say. I think if this mantra is said right from your heart than it doesn't matter how you pronounce it, because it's not about the pronunciation ... it's about the truth hidden in it and saying it from the heart. 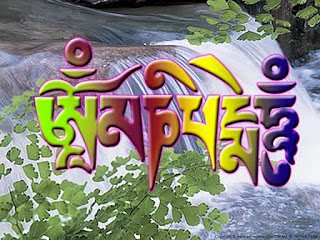 A few years ago I started "Haiku Shuukan", a weekly meme and I remember that I had a small series there about this mantra. Here is one of the haiku I wrote in response on that small series:

entering Heavens
finally purified and without ego
I became wise

Can I create a new one inspired on this theme for today? Let me give it a try:

This episode is open for your submissions tonight at 7.00 PM (CET) and will remain open until June 9th at noon (CET). I will try to publish our new episode, campanula (hui mao dang shen), later on.