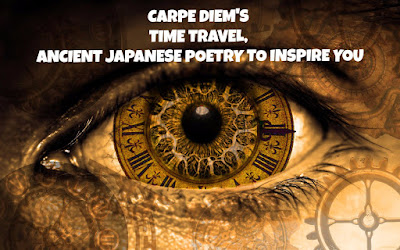 Welcome at a new episode of our "Time Travel" feature. This feature I have created especially for our "weekend-meditation" and its goal is to create new haiku, tanka or other Japanese poetry form inspired on poems from ancient times. For example: waka taken from the Man'yoshu, as we did in the first episode of this new feature.

This episode I love to introduce to you a well known Japanese novel from the 11th century, The Tale of Genji. And I will share a few poems from this Tale with you to inspire you. Let me (with help from Mark Cartwright) tell you a little bit more about this ancient Japanese novel.

Tale of Genji (by Mark Cartwright); published on 10 April 2017 at www.ancient.eu

The 'Tale of the Genji' or Genji Monogatari, written in the 11th century CE by Murasaki Shikibu, a court lady, is Japan's oldest novel and possibly the first novel in world literature. The classic of Japanese literature, the work describes the life and loves of Prince Genji and is noted for its rich characterization and vivid descriptions of life in the Japanese imperial court. The work famously reproduces the line 'the sadness of things' over 1,000 times and has been tremendously influential on Japanese literature and thinking ever since it was written. The 'Tale of Genji' continues to be retranslated into modern Japanese on a regular basis so that its grip on the nation's imagination shows no sign of loosening.

The work's author is considered to be a lady of the imperial court by the name of Murasaki Shikibu who wrote it over several years and completed it around 1020 CE during the Heian period (794-1185 CE). Murasaki is also known as To no Shikibu. Murasaki was a nickname and shikibu means 'secretariat,' which was the role of her father as in ancient Japan it was common to call a daughter by her father's position. She was a member of the Fujiwara clan. Her birth is accepted as around 973 CE and her death after 1013 CE, the date of the last mention of her in court documents. Details of her life are sketchy except that her father was Fujiwara no Tametoki, a provincial governor, and that she married a fellow Fujiwara clan member, one Fujiwara no Nobutaka, with whom she had one daughter, Daini no Sammi. Murasaki's husband died in 1001 CE, and she then became a lady-in-waiting (nyobo) to Empress Akiko (aka Shoshi) where she displayed great talent in the arts, particularly calligraphy, the harp (koto), painting, and poetry. Besides the novel, other surviving works by Murasaki include poems and her diary.

The novel describes life in the Japanese Imperial Court. Its etiquette & intrigues & above all the central character of Prince Genji. (Genji Monogatari)

The Japanese title Genji Monogatari may be translated as 'The Tale of Prince Genji.' It consists of 54 chapters and 750,000 words, although the final 13 chapters are regarded as a later addition by a minority of scholars principally because the story then no longer concerns Genji but his son Kaoru and takes on a darker tone. Neither do scholars entirely agree on the order of the chapters as many seem like later insertions by the author and several are parallel chapters or narabi where events occur not after but contemporary with the events described in earlier 'ordinary' chapters (hon no maki).

The novel describes life in the Japanese imperial court, its etiquette and intrigues, and, above all, the central character of Prince Genji who is the perfect gentleman in looks and deed. Genji's relations, love affairs, and transition from youth to middle age are all captured by Murasaki's astute writing which combines romanticism and realism in equal measure to capture a timeless treatment of human relations and the general impermanence of all things.


In her own words Murasaki describes this discovery:

"But I have a theory of my own about what this art of the novel is...it happens because the storyteller's own experience of men and things, whether for good or ill - not only what he has passed through himself, but even events which he has only witnessed or been told of - has moved him to an emotion so passionate that he can no longer keep it shut up in his heart. Again and again something in his own life or that around him will seem to the writer so important that he cannot bear to let it pass into oblivion". (Mason, 96)

Murasaki Shikibu (978-1014) is seen as the inventor of the "Psychological Novel", as she shows in her Tale of Genji.

Now we know a little bit about the background of The Tale of Genji and now we are looking to a few poems from this wonderful ancient Japanese novel.

This first poem is a stand alone poem:

since my departure for this dark journey,
makes you so sad and lonely,
fain would I stay though weak and weary,
and live for your sake only!

And here is a beautiful example of a "poem-conversation":

fain would one weep the whole night long,
as weeps the Sudu-Mushi's* song,
who chants her melancholy lay,
till night and darkness pass away

to the heath where the Sudu-Mushi sings,
from beyond the clouds one comes from on high
and more dews on the grass around she flings,
and adds her own, to the night wind's sigh.

Another example of a "poem-conversation":

when on my fingers, I must say
I count the hours I spent with thee,
is this, and this alone, I pray
the only pang you've caused on me?
you are now quits with me

from me, who long bore grievous harms,
from that cold hand and wandering heart,
you now withdraw your sheltering arms,
and coolly tell me, we must part

A last example of what I have called here a "poem-conversation":

even this spot, so far to view
with moon, and Koto's gentle strain,
could make no other lover true,
as me, thy fond, thy only swain
one turn more!
stay not your hand when one is near,
who so ardently longs to hear you

sorry I am my voice to low
to match the flute's far sweeter sound,
which mingles with the winds that blow
the autumn leaves upon the ground

All wonderfully crafted poems in which we can sense the love between the characters. Strong emotions hidden in their words. The Tale of Genji, a psychological love story.

where the cicada casts her shell
in the shadows of the tree,
there is one whom I love well
though her heart is cold to me

amidst dark shadows of the tree,
cicada's wing with dew is wet,
so in mine eyes unknown to thee,
spring sweet tears of fond regret

An awesome "poem-conversation" to work with I think. So I have given it a try with this tanka:

Well ... sorry for this long episode, but I was on a roll. I hope you do not mind. This "weekend-meditation" is open for your submissions next Sunday June 18th at 7:00 PM (CET) and will remain open until June 23rd at noon (CET). I will try to publish our new episode, the first of our Theme Week about Milarepa, the renown poet and yogi from Tibet, later on. Have a great weekend ... be inspired and enjoy creating your haiku, tanka or other Japanese poetry form.

PS. You can find a pdf filed version of "The Tale of Genji" HERE