Carpe Diem's Quest For A (New) Masterpiece #3 the quest continues 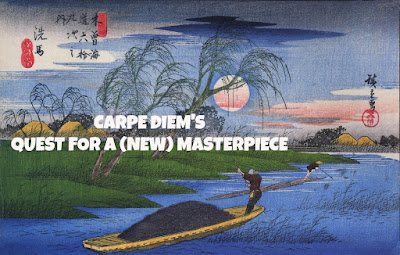 Here at CDHK we are always active with creating haiku and tanka. And we all are hoping for that beauty that will be everlasting ... our masterpiece.
Today I love to continue our quest for a (new) masterpiece. This is the third episode in this quest here at CDHK. I hope you all will participate again and if it's okay by you all I will create a new exclusive CDHK E-book of all your (new) masterpieces after the fourth episode. That fourth episode I will publish next week on Wednesday.

What is a masterpiece? Let me re-produce that from the first episode of this new feature:


Let me give you an example of such a masterpiece by one of the classical haiku poets, Uejima Onitsura:

Uejima Onitsura was a Japanese haiku poet of the Edo period, famous in the Osaka region for his haiku poetry. Belonging to the Danrin school of Japanese poetry, Uejima is credited of helping to define and exemplify Bashō's style of poetry.

He has written several "masterpieces", I love his haiku that I use as an example:

And now it's up to you, my dear Haijin, to create your masterpiece, a haiku or tanka, and share it with us all. Don't be shy ... we are a loving family of haiku poets, so feel free to share your (new) masterpiece.

This episode is NOW OPEN for your submissions and will remain open until September 19th at noon (CEST). I will try to publish our fourth "quest for a (new) masterpiece" on that same day around 7:00 PM (CEST).