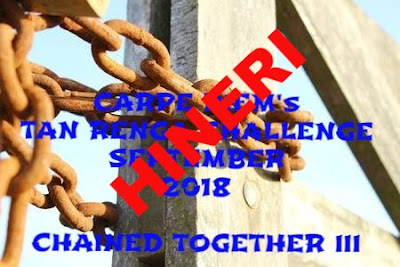 After an easy going weekend I have a new TRC for you. Today I have chosen another episode of our Hineri feature. So today I will give you the 2nd stanza of approximately 14 syllables spread over two lines. This time I don't have chosen a quote by a haiku poet, but by a young Japanese novelist.

First I will give you the quote to work with and than some background on this young Japanese novelist and I will end this episode with the two lined stanza I created inspired on the quote.

[...] "He felt so lost, he said later, that the familiar studio felt like a haunted valley deep in the mountains, with the smell of rotting leaves, the spray of a waterfall, the sour fumes of fruit stashed away by a monkey; even the dim glow of the master's oil lamp on its tripod looked to him like misty moonlight in the hills."[...]


Akutagawa Ryūnosuke, pseudonym Chōkōdō Shujin or Gaki, (born March 1, 1892, Tokyo, Japan—died July 24, 1927, Tokyo), prolific Japanese writer known especially for his stories based on events in the Japanese past and for his stylistic virtuosity.
As a boy Akutagawa was sickly and hypersensitive, but he excelled at school and was a voracious reader. He began his literary career while attending Tokyo Imperial University (now the University of Tokyo), where he studied English literature from 1913 to 1916.
The publication in 1915 of his short story “Rashōmon” led to his introduction to Natsume Sōseki, the outstanding Japanese novelist of the day. With Sōseki’s encouragement he began to write a series of stories derived largely from 12th- and 13th-century collections of Japanese tales but retold in the light of modern psychology and in a highly individual style. He ranged wide in his choice of material, drawing inspiration from such disparate sources as China, Japan’s 16th-century Christian community in Nagasaki, and European contacts with 19th-century Japan. Many of his stories have a feverish intensity that is well-suited to their often macabre themes.
In 1922 he turned toward autobiographical fiction, but Akutagawa’s stories of modern life lack the exotic and sometimes lurid glow of the older tales, perhaps accounting for their comparative unpopularity. His last important work, “Kappa” (1927), although a satiric fable about elflike creatures (kappa), is written in the mirthless vein of his last period and reflects his depressed state at the time. His suicide came as a shock to the literary world.
Akutagawa is one of the most widely translated of all Japanese writers, and a number of his stories have been made into films. The film classic Rashomon (1950), directed by Kurosawa Akira, is based on a combination of Akutagawa’s story by that title and another story of his, “Yabu no naka” (1921; “In a Grove”).

I think this 2nd stanza will inspire you to create the first stanza of the Tan Renga. Have fun!

This episode is NOW OPEN for your submissions and will remain open until September 23rd at noon (CEST). I will try to publish our next episode later on today.