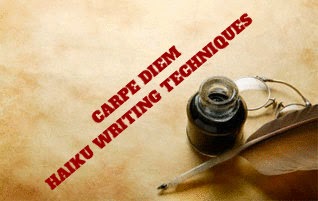 Welcome at a new episode of our CD Haiku Writing Techniques series. As I promised in one of my earlier posts I love to dive into the "matter" of Wabi-Sabi which I wrote about in our last episode of this feature last Wednesday (February 11th). I have titled this episode "The story of Wabi-Sabi continues" and I hope it will give you all more insight in this ancient Japanese phenomenon and to "learn" you how to use it in your haiku-ing.
For this episode I have done some tough research and at the end of this episode I will give a short list of references which I have used to write this episode.

As you have noticed already I have used Wabi-Sabi instead of Sabi and Wabi (as I did in the last episode). In all the literature and articles I have read to prepare this episode (some used, some not) Wabi-Sabi was always used, so that's why I have chosen for Wabi-Sabi this time.

Wabi-Sabi is a compound word and to understand the essence of Wabi-Sabi I need to separate Wabi and Sabi. However both cannot be seen apart from each other, but first I will try to explain Wabi-Sabi as one word.

Wabi-Sabi is an ancient Japanese aesthetic of imperfection, incompleteness and impermanence that originated with Buddhist monks and then was integrated by masters of the Tea-ceremony in the 15th century. And if you keep it in mind, it will cut a lot of crap out of your writing and help you ignore your ego and bring out a beauty in your writing you didn't know you were capable of.

Originally Wabi-Sabi was about creating the ideal meditation environment and it symbolizes aesthetic simplicity and represents Zen Buddhist principles of harmony, respect, purity and tranquility. It's about appreciation, slowing down, using the senses, no ego, no expectations, no judgment. Sounds familiar? Yes ... this is haiku.

Ok ... let us pull Wabi-Sabi apart and look to the both "links" on their own.
Wabi refers to simplicity and humility. It's about being content with little. Wabi, stemming from the root "wa", which refers to harmony and tranquility, has evolved in meaning from describing something sad and desolate to describing something that is purposely humble and in tune with nature.
Sabi refers to the passing of time, which creates a feeling of sadness, longing and melancholy. It's about transient imagery, how things convey how they've lived - their age, their knowledge. Sabi by itself refers to the natural progression of time, and carries with it an understanding that all things will grow old and become less conventionally beautiful. However, things described as "sabi" carry their age with dignity and grace. At the heart of being "sabi" is the idea of authenticity.

You start by being part of the moment (as short as the sound of a pebble thrown in water), see the impression of the moment. Come in contact with the moment, BE the moment. Feel it, smell it, hear it, see it, touch it ... use all your senses to become one with the moment ... BE the moment. Let go all of your thoughts, make your mind empty, feel only the emptiness, be humble to the experience. It's a privilege to be in the moment. That moment grants you its permission to Be IN IT, be grateful to that.
Do you feel it? That's Wabi-Sabi, that's what haiku is.

An example of a haiku filled with Wabi-Sabi by Basho:

the morning's snow
i can chew dried salmon
alone


This haiku by Basho reveals several important techniques that help capture wabi sabi in a poem:

First it presents two simple images without subjective interpretation. This makes the meaning of the poem satisfyingly ambiguous. Is Basho saying that because of the snow he cannot go out and be with friends and must eat a cold meal at home alone? Or is he saying that because of the snow, he "gets" to stay home and enjoy an unhurried meal by himself? Or is he simply looking out on the snow while he eats his morning meal thankful that he can still chew? Or is he noting the time he takes to savor the view by coupling the image with a second image of a "long slow chew"?

Secondly, the images presented in the poem are humble and common. They have a wabi quality. Thirdly the word "alone" is crucial to the success of the poem, because it points to the significance of the humble images. This word "colors" the images and is the sabi element. (Source: still in the stream)

Another example written/composed by myself:

in the backyard
of my ancestor's mansion
roses still bloom

I hope this episode of CD Haiku Writing Techniques has made the idea of Wabi-Sabi more transparent ....

This episode is open for your submissions tonight at 7.00 PM (CET) and will remain open until February 20th at noon (CET). I will try to post our new episode, Sunday afternoon, later on.
By Chèvrefeuille - February 17, 2015