On The Trail With Basho Encore 4 such stillness

I am a day late with publishing this new episode of our special feature "On The Trail With Basho Encore" in which I share haiku by Basho just for fun ... he has written such wonderful haiku ... I just have to share them ...


In my first anthology of my haiku, which was published in 1998 (on own account) I defined haiku as the poetry of silence and emptiness. I think that a lot of our fellow haijin shall say the same of haiku.Basho wrote haiku about stillness, emptiness and loneliness, as we already have seen last month. The above verse is, in my opinion, one of his best haiku with stillness as theme. The stillness of the mountains becomes very strong by the fragile voice of the cicada.
This verse is not based on reality, because a cicada's voice can't pierce a rock, but it works with what is felt (also a sense) and not with what is thought. By the way Basho wrote this haiku at the so called 'mountain temple' in Yamagata. Yamagata was one of the places which Basho eagerly would visit on his 'Narrow Road'. 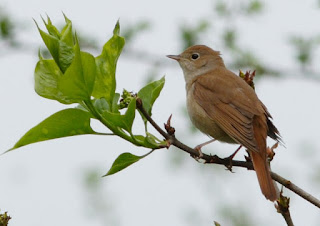 Ah! that sound
the song of a Nightingale
deepens the silence
© Chèvrefeuille


Isn't it a nice one? I love the Nightingale's song and love to write haiku about it. I have written several haiku with the Nightingale in it. For example the following one:
an old temple
shelter for the night -
a Nightingale sings

The above haiku is part of a haibun which I wrote titled "My Narrow Road".

I hope you did like this episode of "Encore" and that it will inspire you all to write an all new haiku.

This episode of "Encore" is NOW OPEN for your submissions and will remain open until next Friday June 19th at noon (CET).
By Chèvrefeuille - June 12, 2015