Today we have a nice Dutch prompt, however ... Today our prompt is Tulips the flower which we, the Dutch, have made better and better, but the Tulip is not an original biological invention of the Dutch. The Tulip is a wild flower which was brought to The Netherlands from Turkey by Carolus Clusius in the 16th century. Clusius became director of the Leiden Hortus Botanicus and planted the first Tulips in The Netherlands. Why has it become a major symbol of the Dutch? Next to the wooden shoes and windmills? I honestly don't know. The only thing the Dutch have done is making the Tulip better.

Our Tulip, now a major export-article, is similar with haiku. Haiku is adopted by the world from Japan. And in every country there are haiku-poets standing up, making a name in haiku and changing the rules of haiku every day again. Haiku rules change, but the basics stay always in use, as is the original Tulip.
Today i love to share a painting by Vincent van Gogh for your inspiration. Van Gogh, i think, is more a post-impressionistic painter, but that is just my idea. Van Gogh has made wonderful paintings, but became famous after his death.

I once wrote a haiku suite about him, i am translating it now and I hope to share it here with you this month. I composed it as i was just starting to become involved with haiku (and tanka).
Back to our prompt for today, Tulips, here is an Acrostic haiku with Tulips in the lead:

In this “acrostic haiku” POETRY is the Acrostichon and EAST the Liaison. (For more about this form visit: DevianArt)


Not an easy form, but it challenged me so I had to try it.

Haiku is an impression and more than poetry  think, because you have to tell a lot with just a few words caught in three lines. So it is an impression of the moment you love to share. This is what haiku made an Art ..., but, as Jane says in her 'Writing and Enjoying Haiku', "everyone has a haiku poet hidden inside ... s/he has to come out that cocoon which is our body". Well ... she (Jane) not really said that ... it is more my impression of what she is saying.

We, the Dutch, are very proud on our Tulips which are very famous around the globe. So ... in a way I am very proud that I can and may share an episode about Tulips here at Carpe Diem Haiku Kai. (And I don't have Tulips in my own garden, something to be ashamed of? No ... I don't really like Tulips.)

I couldn't come up with a Tulips haiku today, so I share an "oldie" in which I have changed "flowers" into "tulips". Here it is, it was first published at my personal weblog Chèvrefeuille's Haiku-blog. Feel free to visit it.

I am confused
winter has departed
snow in april

snow in april
without hesitation tulips bloom
colors between white 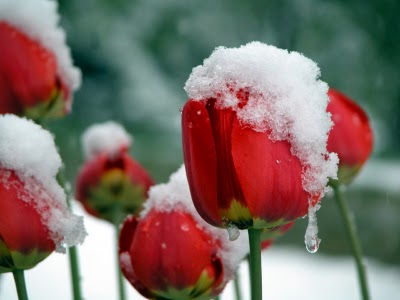 colors between white
such a strange ambiguity
for Mother Earth

for Mother Earth
no doubts at all today
I am confused

This episode is open for your submissions tonight at 7.00 PM (CET) and will remain open until February 15th at noon (CET). i will try to publish our new episode, our third CD-Special with a haiku by Fuyuko Tomita, later on. For now .... have fun!