As I was preapring this new episode of "Little Creatures" I ran into a nice article published in a magazine named "Early Modern Japan" Fall 2003. This article is titled "The Evening Banter of Two Tanu-ki: Reading the Tobi Hiyoro Sequence" and written by Scot Hislop. In this article the author is looking closer to a han-kasen performed by Issa and Ippyo. In one of the links of this han-kasen Ippyo writes/composes the "haiku" which will be our leading verse for this episode of "Little Creatures", but let me first tell you a little bit more about this Tobi Hyoro Sequence.
﻿
﻿


The Tobi hiyoro sequence was composed by Issa and Ippyō and was included in Nishi kasen, a
text compiled by Ippyō. There are slightly variant texts but I have followed the version presented in Maruyama Kazuhiko’s Issa to sono Shūhen. The date on which Issa and Ippyō started to compose this text is, according to Ippyō’s preface and Issa’s diary, the seventh day of the tenth month of Bunka 12 (1815). The prefatory notes to the text in Issa zenshū state that even though it is only a han-kasen (a han-kasen sequence consists of 18 links. It follows the format of the first half of a kasen sequence), the distinctive features of Issa’s style of composition show through clearly in it. It is also important to pay attention to how close Issa’s style is to Ippyō’s. Here is the "preface" of this han-kasen
Preface


去年（こぞ）の冬、わが物見塚（もの みづか）に旅寝せし信濃の一茶が、たぬ きの夜話といふは
Last winter, Issa from the province of Shinano came to pass the night at my “Monomi-zuka.” The following is the evening banter of tanuki...

(Ippyō was the priest of Hongyōji, a temple located near Nippori in Edo. There are now several kuhi (rocks upon which hokku/haiku have been inscribed) with Issa’s hokku on them within the precincts. “Monomi-zuka” refers to the remains of a watchtower that was built by Ōta Dōkan, a famous 15th century poet, castle builder, and general.)

It's surely an idea to read this article your self and if you want to read it, please let me know than I can email it to you. (Or you can find this article to which I am referring here at: https://kb.osu.edu )

Ok ... back to our "Little Creatures" episode ... as you all know the goal of this feature is to write an all new haiku based on this post following the classical rules which you can find in Carpe Diem's Lecture 1 (in the menu above) and as you all (maybe) know, that's not my "cup of tea" to follow those classical rules, but for these Little Creatures episodes I just have to do that myself too. 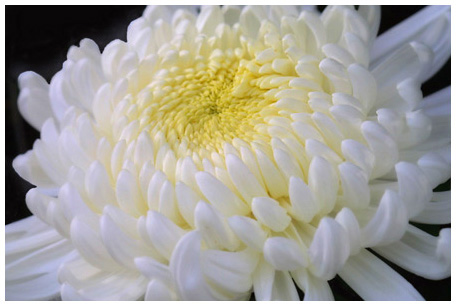 Here is my attempt to write an all new (classical) haiku inspired on this post. I tried to bridge the gap with our Impressionism-month and especially with Vincent van Gogh.

such a bad feeling
he needs to beat insanity -
white Chrysanthemum