Carpe Diem Tokubetsudesu #54 lost in the woods about tanka

Tanka allows the author to play with time, it also allows one to move out of reality into fantasy, imagination, and other thought processes. In tanka one is not bound by just what is, but is open to the emotional life of the author. By being able to switch times, the author can work with memories, and memories are always loaded with emotion, so the following tanka by Jane Reichhold fits the genre perfectly:

Tanka has five lines following the syllables count 5-7-5-7-7 and I think you all recognize this "sequence", it's similar with the Tan Renga, as we have here every Friday.
One of the "Ask Jane" episodes was about tanka. Let us look to that episode again. Jane calls tanka, the grandmother of haiku. I think she is right, because haiku once was part of renga, a chained poem, and as we look at renga we immediately are observing the "tanka"form.

Recently I started to write/compose tanka myself, because there are several haiku poets (including Jane) who are saying that I could be a tanka poet. I don't know that for sure, because my first love is for haiku and tanka, a very nice poetry form too, isn't really my kind of poetry, but ... I have tried it of course.

© Chèvrefeuille (from my archives)

Ot this one, also from my archives:

Ok ... another one .... I am going to love the tanka, can that be true? Am I starting to become addicted to tanka?

And to close this Tokubetsudesu episode I found a really nice haiga with a tanka: 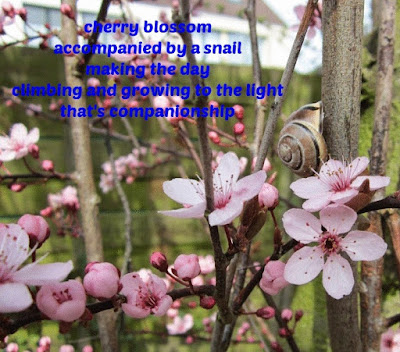 As I re-read this Tokubetsudesu episode I realize that I have written several tanka ... and that it maybe will be my second love ...

Share your tanka inspired on this post with us all here at our Haiku Kai. I am looking forward to all of your wonderful responses on this Tokubetsudesu episode.

This Tokubetsudesu episode is open for your submissions tonight at 7.00 PM (CET) and it will remain open until July 31st at noon (CET). I will try to post our next episode, goraikou or sunrise seen from a mountain top, later on. For now ... have fun!