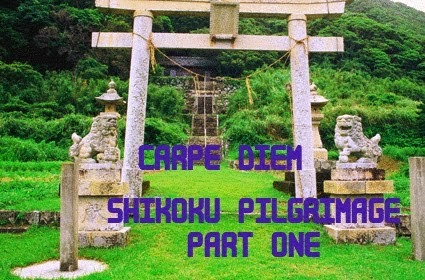 Today we are going further on our pilgrimage along the 88 temples in honor of Buddha and Kobo Daishi on the Island Shikoku. Yesterday we had temple 6 and now we 'hop' to temple 8.

Kumadani-ji (熊谷寺?) is a Kōya-san Shingon temple in Awa, Tokushima Prefecture, Japan. Temple 8 on the Shikoku 88 temple pilgrimage, the main image is of Senjū Kannon. The temple is said to have been founded by Kōbō Daishi. The Hondō (the main hall) was destroyed by fire in 1928 and has been rebuilt. The Daishidō, tahōtō, chūmon, and shōrō have all been designated Prefectural Cultural Properties.
Guanyin or Senju Kannon in Japanese is the bodhisattva associated with compassion as venerated by East Asian Buddhists, usually as a female. The name Guanyin is short for Guanshiyin, which means "Observing the Sounds (or Cries) of the World". She is also sometimes referred to as Guanyin. Some Buddhists believe that when one of their adherents departs from this world, they are placed by Guanyin in the heart of a lotus, and then sent to the western pure land of Sukhāvatī.
It is generally accepted among East Asian adherents that Guanyin originated as the Sanskrit Avalokiteśvara (अवलोकितेश्वर). Commonly known in English as the Mercy Goddess or Goddess of Mercy, Guanyin is also revered by Chinese Taoists (or Daoists) as an Immortal. However, in folk traditions such as Chinese mythology, there are other stories about Guanyin's origins that are outside jatakas of Avalokiteśvara recorded in Buddhist sutras.
The Lotus Sūtra (Skt. Saddharma Puṇḍarīka Sūtra) describes Avalokiteśvara as a bodhisattva who can take the form of any type of male or female, adult or child, human or non-human being, in order to teach the Dharma to sentient beings. This text and its thirty-three manifestations of Guanyin, of which seven are female manifestations, is known to have been very popular in Chinese Buddhism as early as in the Sui Dynasty and Tang Dynasty. Additionally, Tan Chung notes that according to the doctrines of the Mahāyāna sūtras themselves, it does not matter whether Guanyin is male, female, or genderless, as the ultimate reality is in emptiness (Skt. śūnyatā). 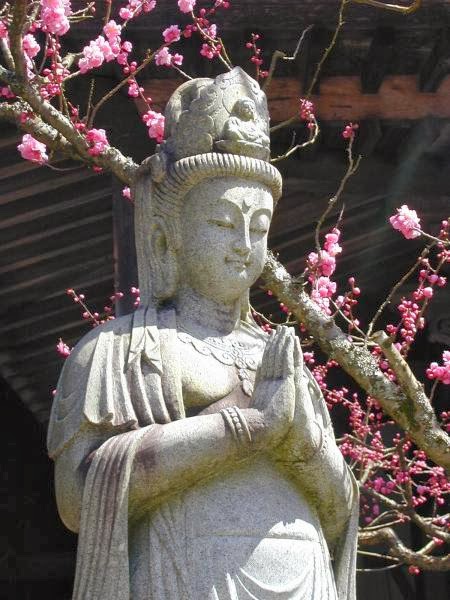 Sunje Kannon is the Eastern Goddess who is very similar with our Virgin Mary and she stands for compassion and mercy.
mother of compassion
reaches out for her children -
lotus blooms again
lotus blooms again
in the bright sunlight of the dawn
honoring Mother
(c) Chèvrefeuille

This episode is NOW OPEN for your submissions and will remain open until February 7th 7.00 PM (CET) and I will try to post our next episode, Horinji Temple 9, later on. For now ... have fun, be inspired and share your haiku with us all here at our Haiku Kai.