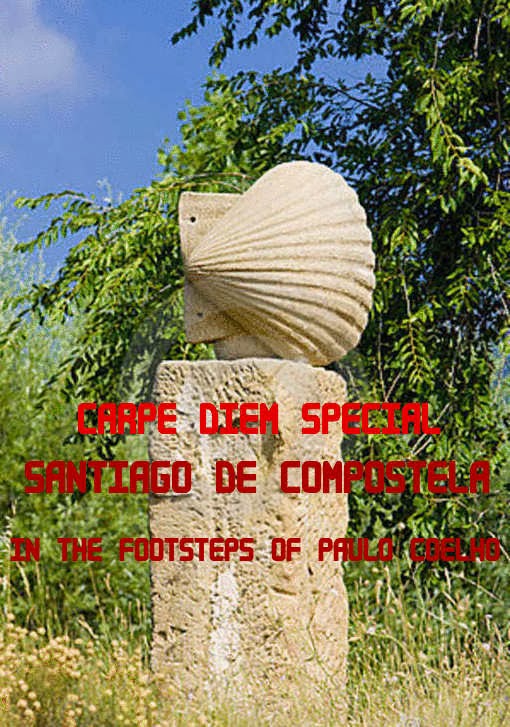 Today we have our first Special episode of this Carpe Diem month and as you all could have read in the promptlist I have no featured haiku-poet this month. Our Specials (5 this month and 5 next month) will all be about the Pilgrimage of Paulo Coelho which he once undertook and wrote a novel about ... he has been on a pilgrimage to Santiago De Compostela (Spain) also known as The Way of St. James.
He went on that pilgrimage after he had failed his initiation-ritual of the Order of RAM (Regnus Agnus Mundi (Rigour Adoration Mercy), a Catholic sect for the study of symbols, something like Opus Dei). 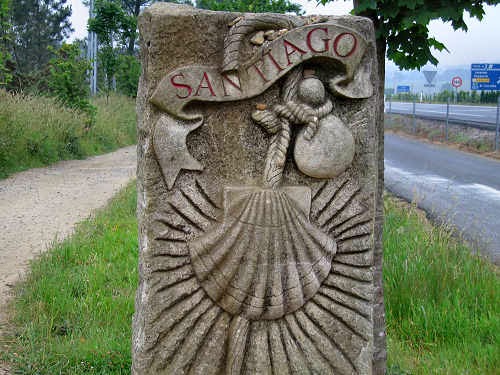 As Paulo arrives in Saint Jean Pied de Port in French, at the northside of the Pyrenees, he searches for Mme Lourdes a woman who will bring him in contact with his guide.

The Road to Santiago de Compostela is from Saint Jean Pied de Port 700 km and the Road follows in the footsteps of the 12th century French priest Aymeric Picaud. Also in that century the ashes of Saint James were used in the fight against the Muslims.

As Paulo arrives at the home of Mme. Lourdes he remembers the adventures of traveling toward the unknown as e.g. Don Quixote (or as he did later in "Aleph"). he realises that although he may not re-gain his sword, he will find himself as he walks The Way of St. James.
Mme. Lourdes writes his name in the register of those who walk the Road and asks him if he has brought Scallops with him. The Scallops are a sign for the pilgrims that they are part of the same adventure and on the same pilgrimage and it has the 'power' to get lodging along the road in the hotels and monasteries.
However ... Paulo says a 'secret word' to identify himself as a follower of The Tradition (the Order of RAM) and than Mme. Lourdes realises that she has to give him the right way to meet his guide. That guide will decide were he may rest, sleeps, eat and drink.
As she has told him everything she hands him a cape, a hat and a sheperd's crook, the traditional outfit for the pilgrims on the Way of St. James. And she hands him a small water gourd and hangs that at the crook. 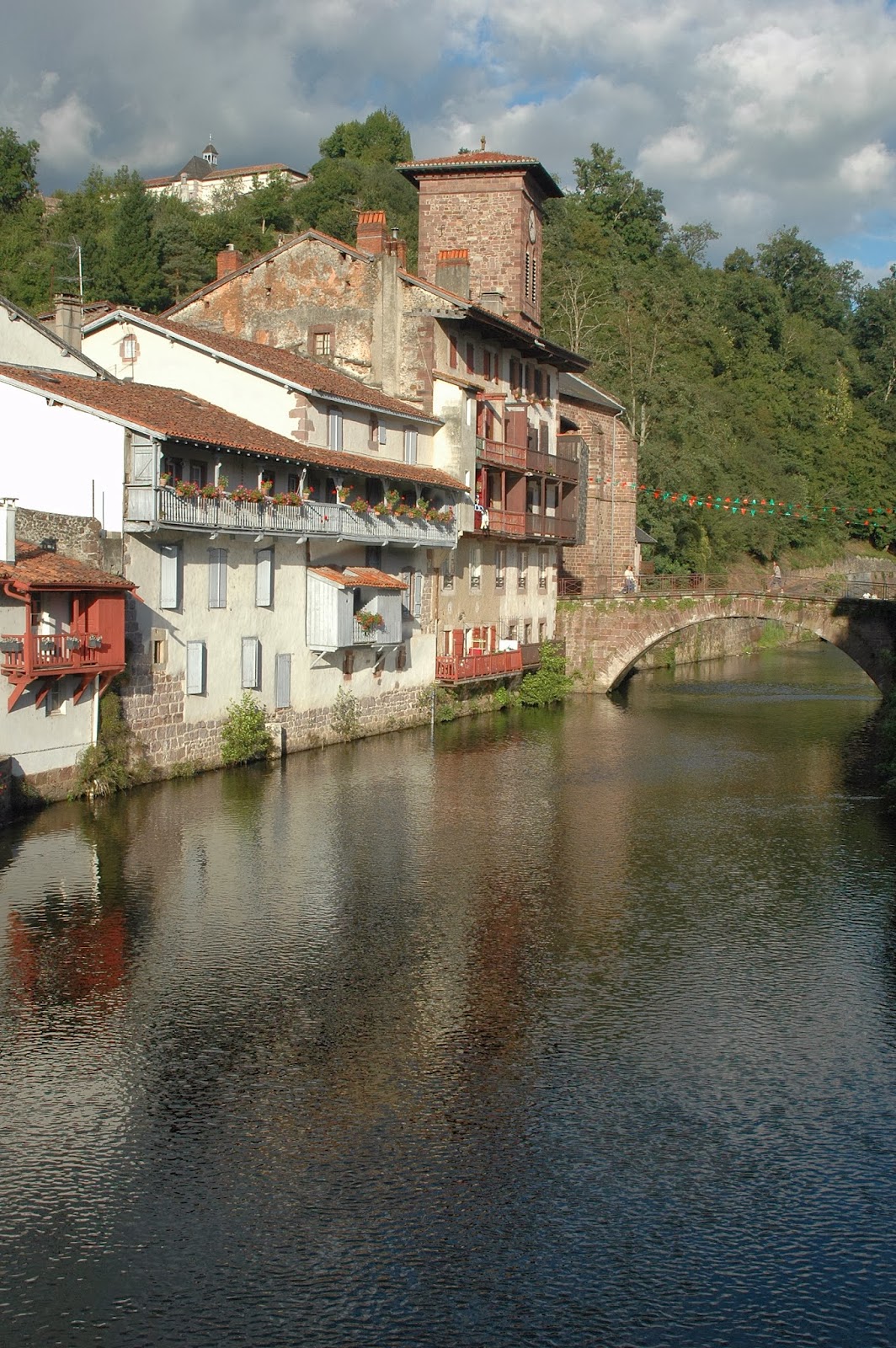 Before he leaves her she blesses him saying the following words:

[...] ‘May the apostle San Tiago be with you, and may he show you the only thing that you need to discover; may you walk neither too slowly nor too fast but always according to the laws and the requirements of the Road; may you obey the one who is your guide, even though he may issue an order that is homicidal, blasphemous, or senseless. You must swear total obedience to your guide.’
"I so swore", answers Paulo.
‘The Spirit of the ancient pilgrims of the Tradition must be with you during your journey. The hat will protect you from the sun and from evil thoughts; the cape will protect you from the rain and from evil words; the gourd will protect you from enemies and from evil deeds. May the blessing of God, of San Tiago, and of the Virgin Mary be with you through all of your nights and days. Amen.’ [...]

The Road to Santiago de Compostela is indicated by stickers of Scallops and little poles and stone statues. As you can see above and hereafter. 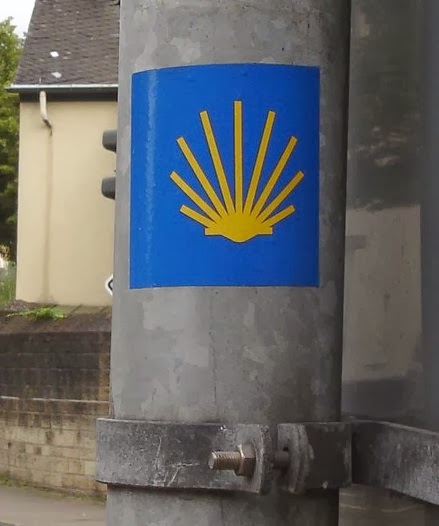 Mme. Lourdes points him which way he has to go to meet his guide and than he is on his way. In his novel he describes that moment as follows:

[...] I left the small city, passing through the wall at the Spanish Gate. In the past, the city had been on the preferred route for the Roman invaders, and through that gate had also passed the armies of Charlemagne and Napoleon. I walked along, hearing the band music in the distance, and suddenly, in the ruins of a village not far from the city, I was overwhelmed by emotion, and my eyes filled with tears; there in the ruins, the full impact of the fact that I was walking the Strange Road to Santiago finally hit me. The view of the Pyrenees surrounding the valley, lit by the morning sun and intensified by the sound of the music, gave me the sensation that I was returning to something primitive, something that had been forgotten by most other human beings, something that I was unable to identify. But it was a strange and powerful feeling, and I decided to quicken my pace and arrive as soon as possible at the place where Mme Lourdes had said my guide would be waiting for me. Without stopping, I took off my shirt and put it in my knapsack. The straps cut into my bare shoulders a bit, but at least my old sneakers were broken in enough that they caused me no discomfort. After almost forty minutes, at a curve in the road that circled around a gigantic rock, I came upon an old abandoned well. There, sitting on the ground, was a man of about fifty; he had black hair and the look of a gypsy, and he was searching for something in his knapsack. [...] (Source: The Pilgrimage by Paulo Coelho) 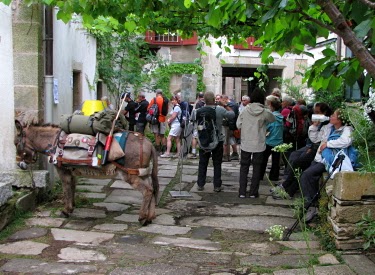 my heart is praying
as I walk the Way of St. James
straight through the mountains

Well ... our first Special episode is ready ... I hope all liked reading it and I hope that it will inspirer you all to write, compose, new haiku. Have fun, be inspired and share ... This episode will be open for your submissions tonight at 7.00 PM (CET) and will remain open until February 3rd 11.59 AM (CET). I will (try to) post our next episode later on today around 7.00 PM (CET) and that will be, Konsenji (temple 3).