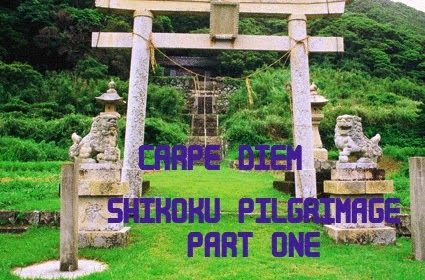 Today we are going further with our Shikoku Pilgrimage along the 88 temples which are all at places were Kobo Daishi has been. We are still on the first part of this pilgrimage, in Tokushima Prefecture, one of the four 'countries' on the Isle of Shikoku.
Fujiidera is devoted to the Buddha of Medicine and Healing or Yakushi Nyorai, which we have met in one of earlier episodes this month.


I love to tell you a little bit more about this Buddha's history. Starting in the 7th century in Japan, Yakushi was prayed to in the place of Ashuku (Akshobhya). Some of Yakushi's role has been taken over by Jizō (Ksitigarbha), but Yakushi is still invoked in the traditional memorial services for the dead.

“Wherever this sutra circulates or wherever there are sentient beings who hold fast to the name of the Medicine Buddha [Yakushi Buddha] and respectfully make offerings to him, whether in villages, towns, kingdoms or in the wilderness, we [the Twelve Generals] will all protect them. We will release them from all suffering and calamities and see to it that all their wishes are fulfilled”.

Every city, village or town in Japan has symbols which are important for the city. Yoshinokawa has his own symbols and maybe they will inspire you to write haiku. Here are those symbols:

Rhododendron, Chrysanthemum and the Kingfisher (or Alcedo Atthis), all three are wellknown around the world and in Ancient Japan those symbols were also Kigo, seasonwords, to use in haiku. Through nature haiku is connected with Buddhism, but also with all times.

An awesome episode in which we have learned a little bit more about Buddhism and we will go on with our pilgrimage as O-Henro and tomorrow we will arrive at  Shozanji (the 12th temple). I just leave it there and love to share a picture of Fujjidera's wonderful Wisteria Garden.

Well ... I hope this post will inspire you all ... contribute your haiku to our Haiku Kai by linking your weblog to our haiku-family. This episode is NOW OPEN for your submissions and will remain open until February 11th 11.59 AM (CET) and I will post our next episode later on today. For now have fun, be inspired and share your haiku with us all here at Carpe Diem Haiku Kai.
PS.: I am behind with commenting ... will catch up asap.