Carpe Diem #406, To catch up on our Shikoku Pilgrimage, three days in one post 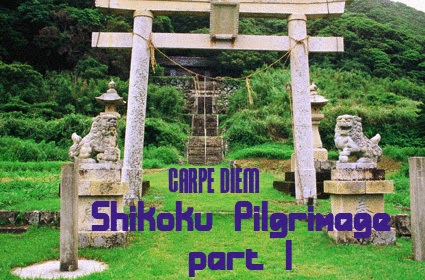 It was great to have a few days off ... I could do other things which were set on hold for Carpe Diem and last Sunday (February 23th) we had the babyshower for my youngest daughter who is pregnant and hope's to give birth to her first child around March 20th. It was a baby-shower meant for only her girl-friends and niches, sisters, aunts and her mum. So I had to leave my house ... no problem by the way, because I had to baby-sit my three grandsons (the kids of my oldest daughter) and enjoyed it very much.

Well ... I had to take off these few days and I will catch up in this episode of Carpe Diem. I will just mention the four temples which we had to miss as a result of my absence. So let's go on a quick trip along the four temples we missed.

We had to visit temples 33 until 35, all three temples devoted Yakushi Nyorai, the Buddha of Healing and Medicine.

sunflowers bloom again
after a bad summer storm
stronger than ever

stronger than ever
the pilgrims chanting their mantra
silent prayers

Not a strong trio of haiku I think, but I had to write these words. In a way they bring an intense feeling of joy and happiness to me ... maybe it's in a way a kind of saying "Thank You All For Your Prayers", they have made my dad stronger again and he may leave the hospital this Wednesday February 26th ... than the real recovery starts of course ... at home together with my mum ... and they will survive this again ... as they did earlier ... through their strong love and faith.

This episode is NOW OPEN for your submissions and will remain open until February 28th 11.59 AM (CET) and I will try to publish (a day later than planned) our new Carpe Diem Special episode, the fifth of this month about The Way of St. James. Have fun, be inspired and share your haiku, senryu, tanka, kyoka or haibun with us all here at Carpe Diem Haiku Kai.