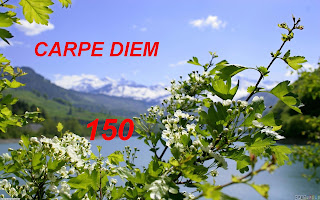 A new mile stone in our Carpe Diem history ... today we have our 150th prompt. I think this is a wonderful prompt. Today we share haiku on Haru Higan (Spring Equinox). Meteorlogical Spring starts (on the Northern hemisphere) on March 1st, but astrological Spring starts on March 21th and that's today.


The most common equinox are Summer - and Winter equinoxe, but Spring and Autumn also have equinox. Spring equinox is called Vernal Equinox or 'Alban Eilir' and on that day druids celebrating the coming of the light back to the world. It's, for druids and pagans, one of the most important celebrations. After the dark period of Autumn and Winter finally light is returning to the world and nature's coming to life again.
In ancient Egypt Achnaton, a pharao, promoted the One-God Religion of the Sun and in that religion the returning of the light was also an important issue.
Druids, as you may know, are a kind of religious man (and woman) in the Celtic culture. I have sought the Internet for some background on this Spring Equinox, which in Celtic druidry is called 'Alban Eilir' and I found this:

The name for the festival of the Spring Equinox in Druidry is Alban Eilir, which means 'The Light of the Earth'. As the Sun grows warmer, so life begins to show through the soil. Small signs at first - the daffodils and crocuses - then more green as the bluebells and wood anemones spread through the woodland. Plants are seen by some as inanimate greenery with no actual feelings and life force. But Druids see life in all living things, from rocks and stones, to rivers and springs, plants and trees - all life is sacred. Have you ever thought about how you recognize the beginning of Spring? Is it the plant life? The weather? How does a plant know when it is time to grow? It cannot tell the time or see a calendar. Yet it knows. If it has senses, then it has consciousness, if it has consciousness then it is more than an inanimate life form. So it is the return of life to the Earth that is celebrated at Alban Eilir, the time of balance.
One of the inner mysteries of Druidry is the Druid's egg. Life-giving, it is the egg protected by the hare, which is the symbol of Alban Eilir - still celebrated by the giving of Easter eggs by the Easter bunny.

In Japan the Spring Equinox, Haru Higan, or Vernal Equinox is one of the most traditional Japanese National Holidays. These holidays seem to have a double origin. One is the celebration of seasonal change typical of an agricultural society: This is the day when the day-time and the night-time are equal length. The actual date of the Vernal Equinox day may change from year to year due to leap year. Based on the Buddhist teaching, this Vernal Equinox is also called Higan no Chu-Nichi, as is Autumn Equinox on September 23rd. On Haru Higan Many Japanese visit their family tombs on this day in the middle of the week of Higan to pay their respects to their ancestors. People weed their family tombs, and leave flowers, incense and ohagi (sweet rice balls covered with red bean paste). It is tradition that ancestors' spirits prefer round food! Japanese consider this period the changing of the season, because it is usually around Higan that the cold front hanging over the Japanese islands weakens, and the weather changes to spring.
Thus we have a saying "Atsusa samusa mo Higan made" ("Heat and cold last until Higan").

At those festivals boats are used to celebrate the returning of the sun, this is called higanbune. And it was a custom to go walk around, enjoy one's shadow, pray at the temples and shrines and to pray foor good fortune. This custom is known as 'praying to the sun' (I couldn't retrieve the Japanese translation) and it's part of the Spring Equinox and the Autumn Equinox. In the Spring Equinox festivities it was called 'welcoming the sun' ( hi mukae, himukae) and in the Autumn Equinox festivities it was called 'saying goodbye to the sun'. During this day Japanese people are visiting friends for a snack, talk and a drink.

I have found a few nice haiku on Haru Higan which I love to share with you all here on Carpe Diem. First a haiku by Issa:

"fair weather by Spring's Equinox"
so they say ..
liars!

Winter was long in Issa's snowy, mountainous province. Shinji Ogawa notes that there is a Japanese proverb which states, "Hot or cold only lasts till an equinox." In Issa province of Shinano, present-day Nagano Prefecture, this saying doesn't at all hold true. Literally, Issa is saying, "Only until the spring equinox [will the cold weather last], they say...[and yet] it's cold!" My rather free translation attempts to evoke Issa's emotion and humor.

Or what do you think of this one written by Origa (nom de plume of Olga Hooper) in 2008:

vernal equinox -
the rising moon is lit
by the setting sun


And what are we doing on this Spring Equinox? As far as I know in my country (The Netherlands) we're not celebrating this equinox. We are celebrating the Summer solstice and the Winter solstice. But ... back to this nice (and difficult) prompt Haru Higan to do some haiku composing myself.


celebrating the sun
with narcissus flowers in my hair -
Spring Equinox

paying my respects
to Mother Nature ... flowers in my hair
Vernal Equinox


I am looking forward to all of your inspired haiku on this prompt for today. Come on celebrate Spring Equinox (or in the Southern hemisphere, the Autumn Equinox) with Carpe Diem. Have fun, be inspired and creative and share your haiku with our haiku community.

This prompt will stay on 'til March 22th 11.59 AM (CET) and I will publish our next episode, Haru fukashi (deep Spring), later on today.