Conviction of feeling - ushinteiThis is Teika's most famous poetical ideal; one that he most developed in his middle and later years. Over this time he came to give ushin two distinct senses. One, in the narrow sense of "deep feeling" as one of the ten styles and in the broader sense of "conviction of feeling" - the quality that must be part of every good poem. Teika felt this could not be an adopted "style" but could result only if the poet "approached the art with the utmost seriousness and concentration". These strong words of stubborn and uncompromising demand were typical of Teika's goal of the highest stand of artistic integrity. Another interpretation of the style is that it uses a highly subjective sense in which the speaker's feeling pervade the imagery and rhetoric of the poem. It is especially appropriate for poems expressing love or grief. 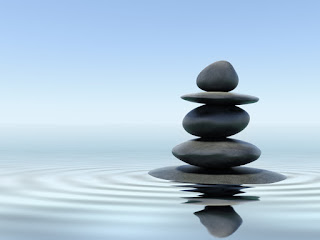 As I was preparing this episode I thought immediately at the "koan"-idea of haiku, because "koan" was (is) connected with Zen Buddhism and in a way I thought of meditaition and contemplation. This idea is based on what Teika says above: "approached the art with the utmost seriousness and concentration". In that sentence I feel meditation and contemplation. But how do you work with that?

Let me give it a try to explain that to you. I think that if you have seen something what caught your attention, a scene just around the corner, that you will try to catch in your poem than you first write down what you have seen. Than you sit down at your desk or whatever were. You read your notes again and again. You can see the scene in front of your eyes and than you look at it with a distance as if you weren't there. The scene comes alive. What do you see? What feeling gives the scene? and so on. In a way you become one (part of) with the scene. As if it happens to you. You look at it again. Concentrate on the scene, think it over, contemplate about it ... and than as struck by lightning you see your poem. The scene unfolds in your poem ... perfection.


Well ... I hope you did like this episode and I hope I have inspired you to write tanka.


This episode is NOW OPEN for your submissions and will remain open until November 14th at noon (CET).