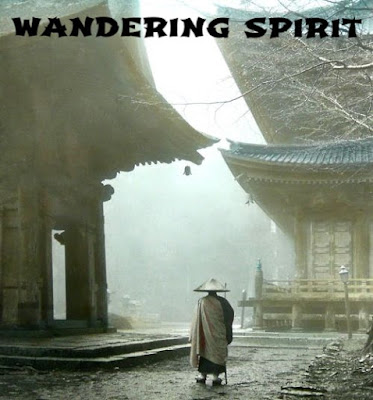 After my dad showed me the beautiful garden he created for my mom he took me by the hand. "Come my son", he said. "We have work to do". I looked at him. He for sure saw the questions in my eyes. "I have been to Tokugawa Iemitsu, the shogun, and he has given you permission to go live with him to be educated", my dad answered. I looked up at him. "Are you sure dad?!" He nodded. "Yes, you may start today if you want?" As he saw the big bright smile on my face he knew immediately that he had given me the greatest gift of all.
I was honored that the shogun invited me to live with him, because you had to be at least seven years old, but I was only four years old. My first year at the home of the shogun was awesome. I learned about the wisdom of the Chinese philosopher Confucius. Through the wisdom of this wise man I also learned to write and read and I discovered the beauty of Chinese poetry.
I remember that the first poem I read was "Li Sao" by Qu Yuan, a Chinese poet. It was a kind of allegory, but wonderful to read or actually recited aloud or chanted, because it was written in the "Fu"-style with a strict onji rule. I really was excited to become educated in all that beauty.
As I became five the shogun made me Wakashu*. He shaved my head partially. Now I had a small shaved portion at the crown of my head and long forelocks at front and sides, but the most exited I became as the shogun bought me a new and beautiful kimono with open sleeves. I really was glad to wear this kimono.

One day my father visited me and as he saw that I wore a beautiful kimono he smiled. "You are such a good looking boy Yozakura. I am glad to see that the shogun has made you Wakashu", he said. He hugged me. "The shogun has given me permission to take you with me to visit your mother's grave. She would be so proud to see you! My son ... now a Wakashu." I saw tears on my father's face and that made me even more proud. "Dad ... don't cry", I said. "I know that you are proud. Mother would have been proud too". My father knelt before me. "I am proud my son. You are now accepted in the samourai world. Your lessons will change now. You will learn how to write and paint, but you also will learn the way of battle. And ..." I saw that my dad swallowed in a reflex. "And you will learn ... you will learn directly from the brother of the shogun, Hoshina Masayuki, who is great in martial arts, but also great in philosophy and poetry ... and ... " My father hesitated to go on with his sentence. Again I saw him swallow. "And he will love you dearly".

A few years later I finally understood why my dad hesitated to tell me everything as I started my apprentice-ship in the house of Hoshina Masayuki and why he said "he will love you dearly". As I was almost three months an apprentice of Hoshina he asked me if I would be his lover ...

I have learned a lot of Hoshina, not only about battle, but also about poetry, painting, philosophy and politics. And I am still grateful for his teachings. After eight years, short after I turned 13 years, I went back to my father to help him in the grocery he started a few years earlier.

Note:* In the above episode of Wandering Spirit I mentioned Wakashu, this was a common way of same-sex culture in the ancient Samourai class. It was a common use for adult man to have a relationship with minors. Of course in nowadays Japan this isn't an accepted habit as far as I know.
By Chèvrefeuille - November 05, 2016