First I have to apologize for being a little bit late with this episode. I am on the nightshift so I hadn't time to publish on time.

Tanka was formerly known as waka and to bring some "history" into this episode of our Tanka Splendor month I thought maybe I can tell you a little bit more about waka. In ancient Japanese times it was a custom between two poets (writers) to exchange waka instead of letter in prose. In particular, it was a common use between lovers, mostly in secret affairs. The lovers exchanged waka in the morning when they met each other at the woman's home. These waka were called Kiniginu, because it was thought the man wanted to stay with his lover and when the sun rose he had almost no time to put on his clothes on which he had lain instead of a mattress.
A well known work of this period is the Tale of Genji in which Murasaki Shikibu (the author) uses a lot of waka (795). 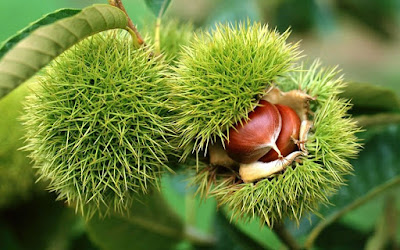 Well ... it's always great to tell you a little bit about the background of our wonderful poetry forms. And now back to our prompt for today.
Today our "Tanka Splendor"- prompt is chestnuts. Chestnuts are very common all over the globe and chestnuts have a kind of deeper meaning that fits the idea of tanka being a love poem, because the chestnut's meaning is fertility and desire and it is said that through a kind of ritual with chestnuts you can find the love of your life.
Another meaning tells us that the prickly burrs are the male part of the chestnut, and the fruit inside are the female part. Well ... maybe that's true, the burrs defend the fruits, and that's what man do ... defending women.

The chestnut, as we have seen above, is a great theme for tanka according to its meaning. So I tried it myself to create a tanka, but before that I love to share a haiku by Matsuo Basho with the above mentioned deeper meaning hidden in it:

a night secret
a worm under the moon
bores in a chestnut
© Matsuo Basho
I leave it up to you to "discover" the deeper, hidden, love layer in this haiku.

This episode is NOW OPEN for your submissions and will remain open until November 11th at noon (CET). I will (try to) publish our new episode, elegant beauty, the third tanka writing technique by Teika, later on.