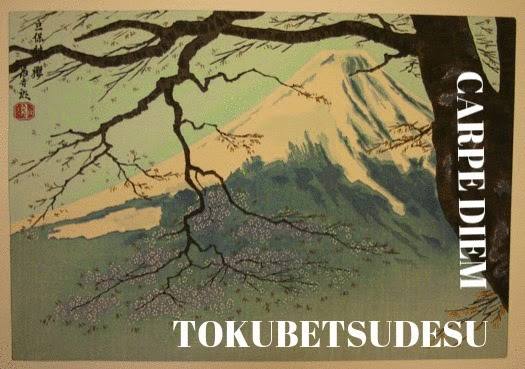 As you maybe know in the beginning of this month I changed the idea of the Ghost Writer posts, it's not longer a ghost writer, but mostly I will make the episodes myself, but I also want to give our family members the opportunity to share their ideas and posts. As I stated at the start of this month I love to bring back the special features which we had and I would like to use the GW-post for that. Because the Ghost Writer isn't longer what it was I have decided to change the name of the Ghost Writer post to Carpe Diem Tokubetsudesu. Tokubetsudesu is the Japanese word for "special" and I think that's a better name. As we have now a new name for the Ghost Writer posts I have also changed the logo of this feature. On the logo you see a woodblock print of the holy mountain Fuji with blossoming cherry blossom in the front.

In this feature I will sometimes bring articles written by CDHK family members or several of the once used special features like e.g, Soliloquy no Renga or Carpe Diem Imagination or as in this episode a Carpe Diem Distillation in which the goal is to distill haiku (or tanka) from a longer poem. This CD Tokubetsudesu episode I have a CD Distillation for you opposed by Paloma of Blog It Or Lose It.

In this CD Tokubetsudesu episode Paloma wants to challenge you all to distill haiku from a poem by N.Scott Momaday.


Navarre Scott Momaday (born February 27, 1934) — known as N. Scott Momaday — is a Native American author of Kiowa descent. His work “House Made of Dawn” was awarded the Pulitzer Prize for Fiction in 1969. Momaday received the National Medal of Arts in 2007 for his work that celebrated and preserved Native American oral and art tradition. He holds 20 honorary degrees from colleges and universities, and is a fellow of the American Academy of Arts and Sciences.

Here is the poem which is chosen by Paloma of Blog It Or Lose It to distill a (or more) haiku from. It's a gorgeous poem, as I may say so, and I think it can inspire you a lot. It's a challenge of course to catch the essence of the poem in a haiku (or few), but it is also a way to look at haiku built from a longer poem ...

The Delight Song of Tsoai-talee

I am a feather on the bright sky
I am the blue horse that runs in the plain
I am the fish that rolls, shining, in the water
I am the shadow that follows a child
I am the evening light, the lustre of meadows
I am an eagle playing with the wind
I am a cluster of bright beads
I am the farthest star
I am the cold of dawn
I am the roaring of the rain
I am the glitter on the crust of the snow
I am the long track of the moon in a lake
I am a flame of four colors
I am a deer standing away in the dusk
I am a field of sumac and the pomme blanche
I am an angle of geese in the winter sky
I am the hunger of a young wolf
I am the whole dream of these things

I think this will be a wonderful challenge and I hope to see wonderful haiku. Thank you Paloma for sharing this poem with us.

This episode will be open for your submissions tonight at 7.00 PM (CET) and will remain open until April 24th at noon (CET). I will (try to) publish our new episode, harmony, later on. For now ... have fun, be inspired and share.