Today our prompt is harmony and it is based on the following verse from the 6th chapter of the Bhagavad Gita:
18. When the perfectly controlled mind rests in the Self only, free from longing for the objects of desire, then it is said: “He is united”.

Without union with the Self neither harmony nor balance nor Samadhi is possible. This is quit the same as the Emptiness idea in Buddhism, but also in the idea of living as a hermit in a lot of other religions or life philosophies. Let us step outside the Bhagavad Gita for a moment and look at the Hermit (IX), one of the cards of the Major Arcana of Tarot. What do we see? 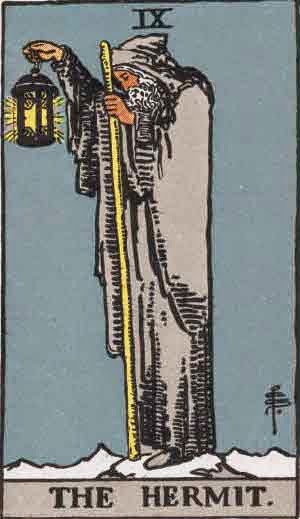 We see an old man, cloaked and hooded, who holds a lantern in his right hand in which a light shines in the shape of The Star of David, two superimposed triangles. In his left hand he has a staff. He stands in the snow somewhere in the mountains as we can see in the background.


He looks like The Fool (0), but is older than The Fool. He is similar with The Fool, but there is a big difference. The Fool gathered his knowledge and wisdom by walking / travelling through the world and to look around him. He saw the beauty of nature, the beauty of God's Creation. The Fool's knowledge is of a low, but lived, level, which I call external knowledge.. The Hermit (IX) gathered his knowledge and wisdom through meditation and contemplation on his own, maybe he used secret scriptures when he sat down to meditate and contemplate or he had spiritual revelations, because he was just alone with God's Spirit. His knowledge and wisdom I use to call internal knowledge on a high level.


The Hermit (IX) closes the third trinity of the Major Arcanum and stands for the Holy Spirit. As The Hierophant represents God the Son, the Redeemer who walked among us, The Hermit represents God the Holy Spirit. It's through the Power of the Holy Spirit that we are in touch with our emotions to grow spiritually and physically.
The Light of the World, depicted in this card by the lantern in the right hand, is one of the names of Jesus Christ (Krishna?). His Light shines upon us and He said of that Light: [...] "No one lights a lamp and puts it in a place where it will be hidden, or under a bowl. Instead they put it on its stand, so taht those who come in may see the light"[...] (Luke 11: 33)

There is a similar verse in the Bhagavad Gita 6th chapter verse 19:

“As a lamp placed in a windless spot does not flicker—to such is compared the Yogi of controlled mind, practicing Yoga in the Self (or absorbed in the Yoga of the Self)"
let shine the light
don't hide it under a bowl -
share the Light of the World


So The Hermit fulfills this task. He lets the light shine and through that light we can see the ancient knowledge and wisdom in the Tarot, the divine Tarot.
A Hermit lives alone in his cave, home, hut or something else. He lives in absolute isolation of mankind. All his days and nights are for becoming wiser through meditation and contemplation. Through his perseverance he comes in contact with his Inner Self, with the Holy Trinity of Father, Son and Spirit.
As we place The Hermit on the Tree of Life we will find him in Chochmah, the second sephira, right after Kether and before Binah. So he is placed in the same spot as Adam. Chochmah is the sephira of wisdom and it's also similar with the 'Third-Eye'. The Hermit is internal knowledge and wisdom and he knows all the ancient mystical secrets and as we all know so did Jesus.
I told earlier that The Hermit lives in complete isolation of the worldly things and manners. As I was preparing this episode through research, the first thought which came in mind was the Temptation of Christ (Matthew 4: 1-11). In which the devil tempted Him, but He succeeded and withstood the temptation.
Also The Hermit (IX) is tempted to leave his cave, but he didn't because he would learn all and everything about knowledge and wisdom.

Another thing which came in mind as I was reading these verses in the Bhagavad Gita is the Prayer of Christ on the Mount of Olives (Luke 22: 39-46). He beseeches His Father to take the cup away. On that moment He was more human than ever, but He knew that He had to drink the cup.
This can point to open the Inner Self as is meant in the above verses of the Gita. Only when the heart, mind and soul are united than you become in harmony. Is this again part of our hypothetical idea that all religions are deriving from Hinduism?
Harmony in my opinion can reach through all boundaries and maybe we will once say “finally the World is united and in Peace”.
finding peace of mind
the soothing sound of rippling water
the rustling of leaves
the rustling of leaves
strengthens my tired mind
that's fortitude

deep inner peace, the beating of my heart,
the music of life

It wasn't really easy to create this episode on harmony, because it has so much different meanings and ideas ...

This episode is open for your submissions tonight at 7.00 PM (CET) and will remain open until April 25th at noon (CET). I will (try to) publish our new episode, Lotus, later on. For now .... have fun, be inspired and share your haiku with us all.