It's Wednesday again and so it's time for a new episode of our former Ghost Writer, Tokubetsudesu, feature. This week I love to take you on a trip along flowers and challenge you to write an all new haiku following the classical rules on flowers and by using images. This week's Tokubetsudesu episode will bring CD Imagination, one of our special features, back to your attention.

Flowers ... there are a lot of haiku (classical, non-classical, ancient and modern) about flowers. Sometimes flowers as a bigger picture, sometimes more specific e.g. violets or sunflowers. This week I have gathered a nice series of haiku on flowers for your inspiration and a few beautiful images to help to awaken your muses ...

hidden flowers
the heart resembles
a trip to Kiso

The preface of these two was:

'As Kyoriku leaves for Hikone by the Kiso Route".

The name of the tree (Shii) is the castanopsis cupsidata (or fake, apparent, chestnut) which bears inconspicuous flowers. Well ... let me go with the flow and look a bit closer to these haiku. Both are about traveling, both speak about 'hidden flowers'. The line 'hidden flowers' is about the inconspicuous flowers of the Shii, but can easily be seen as a line that points to hidden meanings, or secrets.
Another nice haiku, this time composed by Kobayashi Issa (1763-1827):

amid mustard flowers
till the ten o'clock bell...
morning tea

Or what do you think of this gorgeous Morning Glory haiku by Chiyo-Ni (1703-1775) who says of her own haiku:

The morning glory!
It has taken the well bucket,
I must seek elsewhere for water.

The above haiku is very famous and in Chiyo-Ni's words above we can easily see and feel the strong influence of Basho, who was admired by Chiyo-Ni. 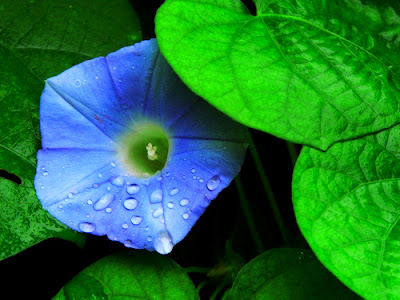 Another classical haiku-poet which I love to share a haiku of is Yosa Buson (1716-1784), he not only was a great haiku poet, but also a great painter of haiga.

The tea-plant flowers--
whether white or whether yellow,
hard to tell

Let me now look at a few modern haiku poets' haiku on flowers.

For example this one by Dolores, one of our haiku kai family members:

Or this one by another haiku kai family member, Maniparna:

© Maniparna
And to close these examples of modern haiku poets a haike cascade by Leslie and by Jane Reichhold:


one flashlight
in the daisy meadow
stars 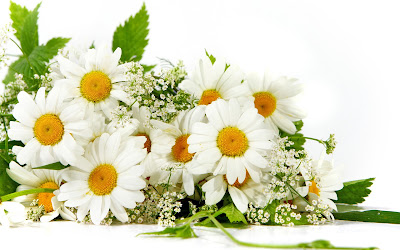 All wonderful haiku written by classical and modern haiku poets. I think I will share a few more haiku on flowers for your inspiration. What do you think of this one by Garry Gay, one of our featured haiku poets last year.


Dandelion seed--
unnoticed
in his beard

Next to his haiku, Garry Gay is a respected photographer and the following photo goes with this above shared haiku:

one flower
on the cliffside
nodding at the canyon

Flowers ... a great topic in haiku which brings wonderful and beautiful haiku. Here is a "troiku" which I wrote myself in which a peony plays the lead:

pink flowers
as far as man can see -
purple sea

!! More about the "troiku" you can find in the menu at the top of our Haiku Kai. "Troiku" is a haiku-form which I created at the start of Carpe Diem Haiku Kai. 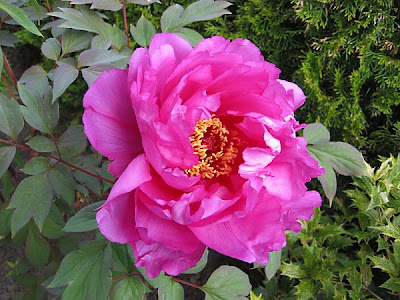 Well .... it's much to take I think, but I enjoyed creating this episode of Tokubetsudesu (former Ghost Writer) and I hope it will inspire you to write all new haiku, tanka of haibun. You can use the haiku and the images for your inspiration. Have fun!

This episode of Tokubetsudesu is open for your submissions tonight at 7.00 PM (CET) and it will remain open until June 12th at noon (CET). I will (try to) publish our new episode, eagles, later on. For now .... have fun, be inspired and share your inspired poem with us all.
By Chèvrefeuille - June 09, 2015