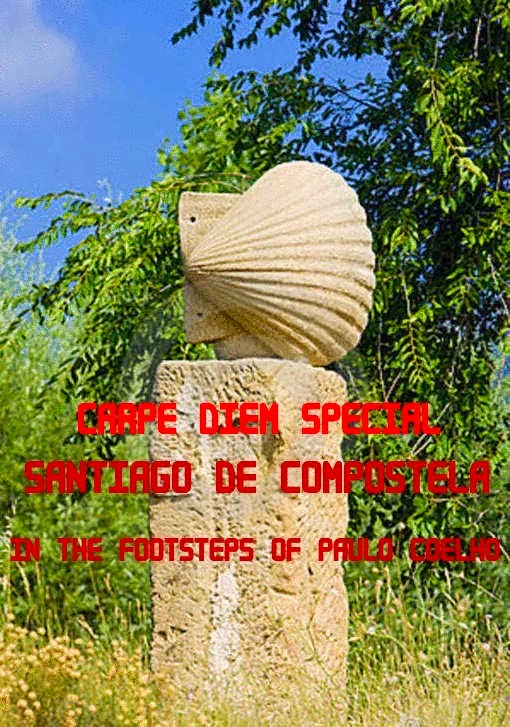 Today we will enter the last part of our pilgrimage to Santiago de Compostela together with Paulo and his companion Petrus. Will he retrieve his sword? We will see ...

As we go on after the Self challenge of our last Special episode we encounter Paulo and his companion Petrus somewhere on the road. Paulo has had an encounter with a dog in the ruined city of Foncebadon and is wounded. Petrus carries him towards the house of a blacksmith, were several humans help him to give first aid and care.


He is taken good care of, but than the story goes that Paulo has Rabies and so they send him away because they are anxious that he will become Rabid and will spread the disease. As they leave the blacksmith's home Paulo asks Petrus if he was worried about his recovery. Petrus than answers:

[...] ‘There is an understanding about the Road to Santiago that I have not told you about before,’ he said. ‘Once a pilgrimage has begun, the only acceptable excuse for interrupting it is illness. If you had not been able to recover from your wounds and your fever had continued, it would have been an omen, telling us that our pilgrimage had to end there.’ [...] (Source: Paulo Coelho's The Pilgrimage)

As they went on they walk along a path on which crosses are statued every 30 metres, one of the crosses has fallen and than Petrus asks, no commands, Paulo to set the cross again in a standing position. Paulo, unless the wounds on his hands, arms and legs, does what Petrus is asking for. As Paulo is busy with this work he uses all the excercises he had learned from Petrus, As he uses the Excercise of the Seed he conquers the pain, realising that their was once a Saviour who had done the same, and sets the cross again in it's standing position.

After a while they arrive at Ponferrada on an ancient railway station were they sit down on an ancient steam-locomotive. There Petrus tells Paulo the secret of RAM, The Tradition which will lead him back to his sword.

[...] ‘The secret is the following,’ Petrus said. ‘You can learn only through teaching. We have been together here on the Road to Santiago, but while you were learning the practices, I learned the meaning of them. In teaching you, I truly learned. By taking on the role of guide, I was able to find my own true path. ‘If you succeed in finding your sword, you will have to teach the Road to someone else. And only when that happens – when you accept your role as a Master – will you learn all the answers you have in your heart. Each of us knows the answers, even before someone tells us what they are. Life teaches us lessons every minute, and the secret is to accept that only in our daily lives can we show ourselves to be as wise as Solomon and as powerful as Alexander the Great. But we become aware of this only when we are forced to teach others and to participate in adventures as extravagant as this one has been.’
I was hearing the most unexpected farewell in my life. The person with whom I had had the most intense bond was saying good-bye right there in midjourney – in an oilysmelling train yard, with me forced to keep my eyes closed. ‘I don’t like saying good-bye,’ Petrus continued. ‘I am Italian, and I am very emotional. But according to the law of the Tradition, you must find your sword alone. This is the only way that you will believe in your own power. I have passed on to you everything that I have to give. The only thing left is the Dance Exercise, which I am going to teach you now; you should perform it tomorrow at the ritual.’
He was silent for a while, and then he spoke: ‘May that which is glorified be glorified in the Lord. You may open your eyes.’ [...] (Source: Paulo Coelho's The Pilgrimage)

The last part of the Camino Paulo has to walk completely alone, conquering his Self again and looking for his Saviour. Finally he arrived at the point were his Master welcomes him and give him back his sword.

[…] “In the small church there was no cross. There on the altar were the relics of the miracle: the chalice and the paten that I had seen during the dance, and a silver reliquary containing the body and blood of Jesus. I once again believed in miracles and in the impossible things that human beings can accomplish in their daily lives.
The mountain peaks seemed to say to me that they were there only as a challenge to humans – and that humans exist only to accept the honor of that challenge. The lamb slipped into one of the pews, and I looked to the front of the chapel. Standing before the altar, smiling – and perhaps a bit relieved – was my Master: with my sword in his hand. I stopped, and he came toward me, passing me by and going outside. I followed him. In front of the chapel, looking up at the dark sky, he unsheathed my sword and told me to grasp its hilt with him. He pointed the blade upward and said the sacred Psalm of those who travel far to achieve victory:

“A thousand fall at your side, and ten thousand to your right,
but you will not be touched.
No evil will befall you, no curse will fall upon your tent;
your angels will be given orders regarding you,
to protect you along your every way.”
I knelt, and as he touched the blade to my shoulders, he said:


“Trample the lion and the serpent, The lion cub and the dragon will make shoes for your feet.”
As he finished saying this, it began to rain. The rain fertilized the earth, and its water would return to the sky after having given birth to a seed, grown a tree, brought a flower into blossom. The storm intensified, and I raised my head, feeling the rain for the first time in my entire journey along the Road to Santiago. I remembered the dry fields, and I was joyful that they were being showered upon that night. I remembered the rocks in Leon, the wheat fields of Navarra, the dryness of Castile, and the vineyards of Rioja that today were drinking the rain that fell in torrents, with all of the force in the skies. I remembered having raised a cross, and I thought that the storm would once again cause it to fall to earth so that another pilgrim could learn about command and obedience. I thought of the waterfall, which now must be even stronger because of the rainfall, and of Foncebadon, where I had left such power to fertilize the soil again. I thought about all of the water I had drunk from so many fountains that were now being replenished. I was worthy of my sword because I knew what to do with it. The Master held out the sword to me, and I grasped it. I looked about for the lamb, but he had disappeared. But that did not matter: the Water of Life fell from the sky and caused the blade of my sword to glisten.” […] (Source: Paulo Coelho’s The Pilgrimage)


And here ends this Pilgrimage in which Paulo has changed a lot as a person. He has become a totally different person than who he was on the day that he started with his Way of St. James. We had the opportunity to follow within his footsteps and maybe … we all have transformed too.

This episode is NOW OPEN for your submissions and will remain open until March 31th 11.59 AM (CET). I will post our next episode, Shido-ji (temple 86), later on today (I will try to be on time).