Welcome at a new episode of Carpe Diem's Europe Ginko. Today we will visit the last of the "Inner Six" (the six countries who founded the EU) and that's my own country, The Netherlands.
During the existence of Carpe Diem (since October 2012) I told you all several things about my country and so it will not be an easy task to bring this episode of our Europe ginko. Because ... what can I tell you more about my country.

Of course there is that cliche ... the Dutch walk on wooden shoes, they have made the tulip one of the most beautiful flowers, the Dutch are specialized in creating new land through their windmills. Or those other cliches ... Van Gogh and Rembrandt ... or the freedom to use soft drugs ...

All those cliches are true, of course we not only walk on wooden shoes ... but we did in our history. The dutch were Always hard working people in constant battle with the sea, the water.


My country is very flat, but there are regions which are not that flat. For this part of our ginko I love to introduce to you the part of my country that is in the southeast point, this region is called "South Limburg" and it's one of the most beautiful parts of my country (in my opinion of course). There are hills and valleys, beautiful forests, thousands of small brooks and it's ... just beautiful ....

On the above image you see the very specific 'half-timbered houses' of this region of The Netherlands. And you can see that this part really isn't very flat. 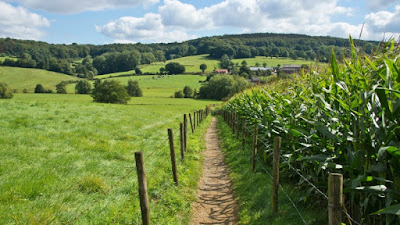 sandy paths
along fields of corn
the song of a skylark

This is really the "other" side of The Netherlands, maybe you knew this already, but maybe you didn't, but my country is really beautiful.

As I do in every episode of our Europe Ginko I have a few haiku from one of my fellow haiku poets here in The Netherlands. Maybe you know this haiku poet, because he was also renown.


A salty summer;
every taste of the sea
in the niçoise.


A small line of sun
between the curtains:
dust on mahogany


Each time
I try to smile I also
show my teeth.