Today our last stage on our Europe Ginko. We will end our ginko in Portugal, which became a member of the European Union (EU) in 1986. Let me tell you something about Portugal's history.


The territory of modern Portugal has been continuously settled, invaded and fought over since prehistoric times. The Iberians, Celts, Phoenicians, Carthaginians and the Romans were followed by the invasions of the Visigothic and the Suebi Germanic peoples, who were themselves later invaded by the Moors. These Muslim peoples were eventually expelled during the Christian Reconquista. Portuguese nationality can be traced back to the creation of the First County of Portugal, in 868. In 1139, Afonso Henriques was proclaimed King of Portugal, thus firmly establishing Portuguese independence, under the Portuguese House of Burgundy.

In the 15th and 16th centuries, under the House of Aviz, which took power following the 1383-85 Crisis, Portugal expanded Western influence and established the first global empire, becoming one of the world's major economic, political and military powers. During this time, Portuguese explorers pioneered maritime exploration in the Age of Discovery, notably under royal patronage of Prince Henry the Navigator and King João II, with such notable discoveries as Vasco da Gama's sea route to India (1497–98), Pedro Álvares Cabral's discovery of Brazil (1500), and Bartolomeu Dias's reaching of the Cape of Good Hope. Portugal monopolized the spice trade during this time, under royal command of the Casa da Índia, and the Portuguese Empire expanded with military campaigns led in Asia, notably under Afonso de Albuquerque, who was known as the "Caesar of the East".
The destruction of Lisbon in a 1755 earthquake, the country's occupation during the Napoleonic Wars, the independence of Brazil (1822), and the Liberal Wars (1828-1834), all left Portugal crippled from war and diminished in its world power. After the 1910 revolution deposed the monarchy, the democratic but unstable Portuguese First Republic was established, later being superseded by the "Estado Novo" right-wing authoritarian regime. Democracy was restored after the Portuguese Colonial War and the Carnation Revolution in 1974. Shortly after, independence was granted to all its colonies, with the exception of Macau, which was handed over to China in 1999. This marked the end of the longest-lived European colonial empire, leaving a profound cultural and architectural influence across the globe and a legacy of over 250 million Portuguese speakers today.


Now we know a little bit more about Portugal's history, but history is not a big part of haiku, nature however is. So let us take a look at the nature of Portugal.

Portugal has a long beach-line it is almost surrounded 1005 by water and the West Coast of Portugal is really stunning.

waves come and go
hidden between mountains -
love on the beach

But of course Portugal has forests too:

babbling brook
I breath the fresh morning air
and smile

Wow ... what a beautiful country Portugal is. I know I have said this often this month, but as I look at these images ... than Portugal is like paradise.

In every episode of our Europe ginko I introduced haiku poets from the countries we visited. So in this last episode of this month I will do that too. I have searched the Internet but couldn't find haiku poets from Portugal, but I love to share a few haiku in Portugese, so I had to "take the airplane" to Brasil. In Brasil they speak Portugese. So I have a series of Brazilian haiku for you.


Without asking, the wind
Sheds the flowers on the ground . . .
I never dared.


On the cold slab
says goodbye to spring
a withered rose 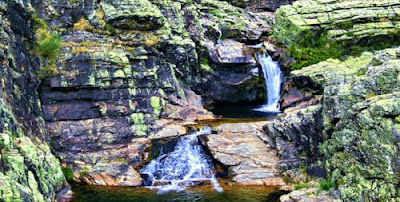 
early fall
full of herself
the first moon


end of the day
open door
the frog peeps


© Alice Ruiz
Well ... it has become a nice last episode I think, however it is sad that I couldn't find Portugese haiku poets, but I hope you did like the Brazilian haiku.

This episode is NOW OPEN for your submissions and will remain open until July 4th at noon (CET). I will try to publish our new episode, the first of July ... , later on.
By the way I hadn't time to create the new prompt-list for July, but we are exploring the mysterious, mystical and magical nature.