In The Spotlight at Carpe Diem #3 Valentina Ranaldi-Adams 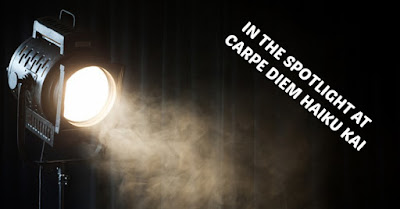 It is my pleasure to bring a new episode of "In The Spotlight" at Carpe Diem. In this feature I introduce Haijin without a personal weblog. This time I love to introduce Valentina Ranaldi-Adams to you all. I got to know Valentina through an email she send me with a wonderful haiku for one of our Souchou magazine editions. I was immediately "sold" as I read her haiku and it is really a honor to introduce her here at Carpe Diem. She also submitted haiku for our "Winter" kukai, so she also was included in our exclusive CDHK e-book "Melting to Nothingness" in which I gathered all the haiku submitted for the kukai "winter"  and "time".

Here is her submissions (for the "time"-kukai):

countdown begins
on New Year's Eve
lost in your kiss

Valentina is a very gifted haiku poetess who submits haiku for several magazines, she was published in Akisame, the weekly newsletter of the European Haiku Society and in Cattails of the United Haiku and Tanka Society and ... last but not least in our own e-zine.

I have asked her to introduce herself to us:

As an adult, I have always been attracted to activities that involve precision.  I studied mathematics asa university student.  I worked as a computer programmer for several years.  Now I write haiku.
All of these activities involve precision in thoughts and in words.

I usually only write a haiku when I am inspired by a moment.  This is a moment that I want to captureand to remember.  Often I experience these moments without ever leaving my home.   Yet by sharing my haiku and by reading the haiku of others, I feel a connection to haijin around the globe.

Chèvrefeuille graciously offered to print some of my haiku.
Since I am a member of the United Haiku and Tanka Society (UHTS), I begin with one that was
published in the May 2016 edition of  "cattails, the collected works of UHTS".

winter solstice
the glass begins
to fill again
Next is one that I entered into the 2016 Sharpening the Green Pencil Contest, organized by the Romanian Kukai Group.  All of the contest's entries were translated into Romanian and published in a booklet.  I include the translation by Ana Drobot.

train window
one swan glides
on a half-thawed lake

I conclude with four new and unpublished haiku. There is one for each seaon of the year, beginning with summer.

the hum
and the heat increase -
cicadas in June


Well ... I think I can rest my case .... Valentina Ranaldi-Adams is a great and gifted haiku poetess.

Do you know a haiku poet or poetess to bring "In The Spotlight"  at Carpe Diem? Let me know.

Email ThisBlogThis!Share to TwitterShare to FacebookShare to Pinterest
Labels: haiku, in the spotlight at Carpe Diem, Valentina Ranaldi-Adams
Location: Netherlands