This month is running towards its end and until now it was a wonderful month and I hope you all do like this discovery of the mysterious nature, our theme for life as haiku poets. Today I love to share more about Heather. A nice name, but even more beautiful as a plant ... Here in The Netherlands we have great plains of heather and I remember that we visited those plains very often when I was a young guy. I was always happy as I saw the shepherd with his sheep strolling over the heather plains it really was a joy to watch that scene.

I remember that I once spook to the shepherd and that he told me why he had chosen to be a shepherd. He had become a shepherd because of the bond with nature, the silence of the heather plains and the joy of working with the sheep. He also told me that he always enjoyed the spiritual experience of being one with nature, only him, his dog and his sheep ... awesome. There once was a time that I wished to be a shepherd too, but (as you all know) I became an oncology nurse, having my own "sheep" to care for ... The feeling the shepherd had on the heather plains I have too on the unit where I am working all day. My patients need my attention and they often open up to me ... with their questions about life and death and how they will cope with that ... yes in a way I am a shepherd ... 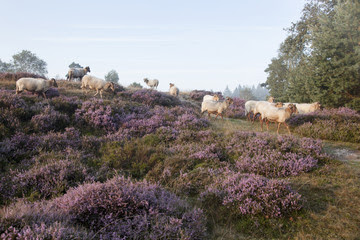 
The symbolism of the heather plant is rich and steeped in history. Growing on the windy hills of Scotland, the white wild heather has come to symbolize protection. Early in the history of Scotland, there were many wars of competing factions. Throughout these battles of position and power, white heather was worn as an amulet of protection. It was thought that the red and pink heathers were stained with blood. Nobody wanted to invite bloodshed into their life, so these colors of heathers would not be carried into battle.  Scottish legend also says that no white heather will ever grow where blood has been shed. One of the sweetest legends of Scottish folklore is that white heather only grows where fairies have been.

The most well known legend of white heather is that in the 3rd century A.D., a young maiden named Malvina, daughter of the poet Ossian was to be married to her true love Oscar. Oscar, a warrior, never came home. Killed in battle, a messenger was sent to deliver the horrible news. The messenger delivered the horrible news with a spray of burgundy heather. Malvina was inconsolable upon hearing the news of her true love’s death. Wondering among moors and mossy hills, she shed futile tears. Legend says that as her tears fell upon the heather it turned the purple flowers into white ones. Instead of drowning in bitterness, Malvina decided right then and there that anyone who came across a white heather would be blessed with good fortune for all of their days.

Does this fit the idea of the shepherd I once spook to? Maybe ... he felt protected between his sheep on the heather and he protects his sheep. Was it good fortune he got? I don't know ... in a way I think he got good fortune, because he felt completely one with nature.

Of course there came another idea in mind ... Wuthering Heights by Emily Bronte, that awesome story about the maiden, Catherine, and Heathcliff. Maybe you know that song by Kate Bush

I liked that song very much and I listened to it very often. That whole sphere of this song caught me, really amazing.

wuthering heights
patches of fog like ghosts
above the heath

patches of fog
crawling up and down the hills
wuthering heights

This episode is NOW OPEN for your submissions and will remain open until July 28th at noon (CET). I will (try to) publish our next episode, a new CD Special, later on. For now ... have fun!